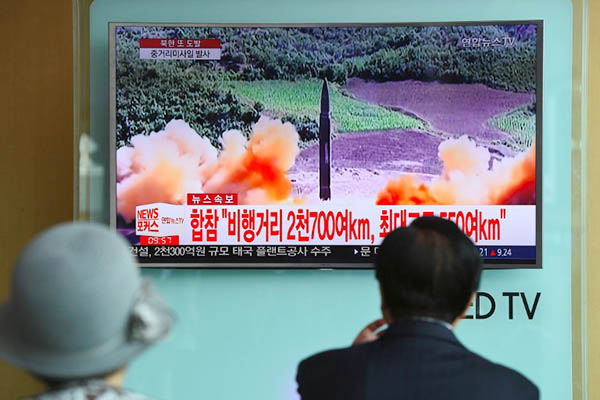 China warned that tensions on the Korean peninsula have reached “tipping point” after North Korea on Tuesday fired a ballistic missile over Japan, but said the United States and South Korea are partly to blame.

Foreign ministry spokeswoman Hua Chunying urged all sides to avoid provocations and repeated Beijing’s call for the North to suspend missile tests in return for a halt to U.S.-South Korean military exercises. The situation is “now at a tipping point approaching a crisis. At the same time there is an opportunity to reopen peace talks,” Hua told a regular news briefing. “We hope relevant parties can consider how we can de-escalate the situation on the peninsula and realize peace and stability on the peninsula,” she added.

Sirens blared out early Tuesday and text messages were fired off across the north of Japan, warning people in the missile’s flight path to take cover.

Seoul and Washington last week began annual war games, which China opposes and are viewed by nuclear-armed Pyongyang as a highly provocative rehearsal for invasion. The North always meets them with threats of strong military counteraction.

Hua said the United States and South Korea “held one round after another of joint military exercises and they exerted military pressure on the DPRK [North Korea]. After so many rounds and vicious cycles, do they feel they are nearer to peaceful settlement of the issue? The facts have proven that pressure and sanctions cannot fundamentally solve the issue.”