China Will Continue to ‘Hold High the Great Banner of Marxism’ 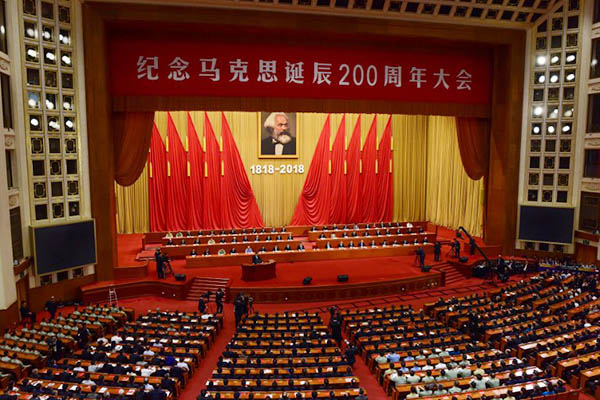 China will continue to “hold high the great banner of Marxism” and the party will forever remain “guardians and practitioners” of the philosophy, Xi said during an official tribute at Beijing’s Great Hall of the People.

Marxism still holds sway in China, despite decades of market-driven growth that has made it the second largest economy in the world.

Students start learning the theories of Marx and Lenin in middle school, and civil servants—even journalists in state-run media—have to take mandatory courses in Marxist theory to secure promotions.

The legacy of the German revolutionary philosopher remains divisive in many parts of the world—including in his home country. But in China, Marx’s 200th birth anniversary is seen as an opportunity to “restore the theoretical soul” of the Chinese people, according to party-mouthpiece People’s Daily.

The flurry of activity in the lead up to the big day, which falls on Saturday, includes a documentary series by China’s state broadcaster titled “Marx Is Right.”

Beijing also gifted a larger-than-life bronze statue of the philosopher to his birthplace of Trier in western Germany, where his work remains controversial more than a quarter century after the fall of the Berlin Wall.

On Friday, Xi urged party members to cultivate the habit of reading Marxist classics and regard it as a “way of life” and “spiritual pursuit.”

China is the largest self-identified socialist country since the fall of the Soviet Union, and state-owned companies continue to monopolize key economic sectors. But it is also home to over 370 billionaires, only second to the U.S., and the wealth gap between urban elite and rural poor has widened in recent years.

The trappings of capitalism—including luxury brands that flooded the country since its reform and opening up in the late 1970s—prompted some analysts in the past to suggest the party was merely paying lip service to Marxism and that practical economic concerns had trumped ideology.

But Xi dismissed skeptics on Friday, saying “the Chinese Communist Party is completely correct [in its choice] to write Marxism on its own banner.”

Xi has made Marx’s seminal work, The Communist Manifesto, mandatory reading for cadres after taking over the reins of the party in 2012.

Banners promoting “socialism with Chinese characteristics”—a Chinese interpretation of Marxist-Leninist theories with a dash of nationalism—have also sprouted in cities and villages in recent years.

Chinese scholars credit China’s ability to lift more than 500 million people out of poverty to this philosophy instead of the opening up of markets. “The development of the Chinese form or interpretation of Marxism… has enabled China to find a unique way of modernizing,” said Zhang Yuwu, a professor of Chinese language and culture at Peking University.

But critics point to how the revolutionary zeal for collectivization under the tumultuous reign of Mao Zedong—the founder of Communist China—led to millions of deaths and an attempt to wipe out temples and mosques that were thousands of years old.

“Marxism has indeed played a major role in China’s history since 1949—not as a philosophy of liberation, but rather as pleasant-sounding theoretical window-dressing for a repressive state,” said Kevin Carrico, a lecturer of Chinese Studies at Macquarie University in Australia. “It is also [a way of] stating clearly that China does things differently,” compared with democracies, he added.

Marx celebrations in China also dovetail with Xi’s attempts to expand the party’s influence as he pushes through sweeping changes in the political system and the military, and consolidate his own power after the removal of presidential term limits. “I tend to think socialism with Chinese characteristics actually has little to do with either socialism or Chinese characteristics,” Carrico said. “These are just pleasant-sounding labels that cover over the reality of a state dedicated primarily to its own self-perpetuation.”