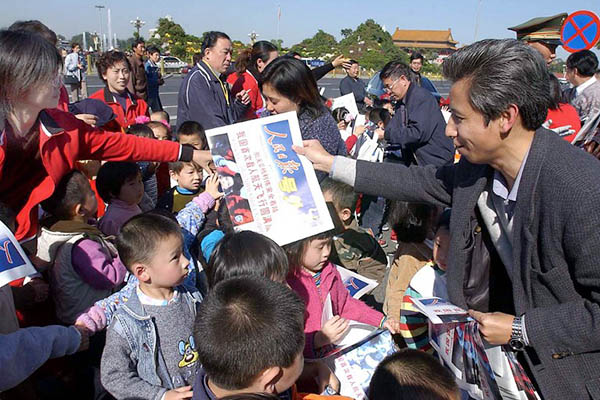 The People’s Daily, the mouthpiece of China’s ruling Communist Party, launched an English-language mobile application on Sunday in what it called a “strategic step” to strengthen Beijing’s influence internationally.

The newspaper, which sold an average of 3.18 million copies a day in 2016, launched a Chinese app three years ago that it says has been downloaded 200 million times, but it did not yet have an app in English for mobile phones. The app launch comes ahead of a key party congress expected to confirm a second term for President Xi Jinping, who has been keen to demonstrate China’s increasing global influence.

“To develop an English app is a strategic move to … further enhance our global influence and presence,” People’s Daily Newspaper Group president Yang Zhenwu said at a ceremony at a brand new headquarters in Beijing, in the presence of senior government officials. “We are striving to achieve what President Xi has asked, namely to speak well of China and to spread his word well,” Yang added.

The Party’s Central Committee representative, vice-minister Guo Yezhou, said it was “very important to tell the world about the theories and philosophy” of the CCP and to “tell good stories about China and the [Party].”

The new English-language app’s home page launched on Sunday with a photo of Nigerian president Muhammadu Buhari, who sent a congratulatory letter to his Chinese counterpart Xi for the upcoming 19th National Congress, a twice-a-decade political meeting.

People’s Daily also has a website that broadcasts its articles in eight languages.

In addition to the People’s Daily, China has several international news channels, including Xinhua news agency and, since the end of 2016, the China Global Television Network (CGTN), which brings together foreign language channels of its state broadcaster. Conversely, the Chinese regime closely controls information allowed to enter the country, and bans the websites of certain foreign media such as Le Monde and the New York Times.

Beijing has maintained that its various forms of web censorship—collectively known as “The Great Firewall”—are necessary for protecting its national security. The Communist Party congress opens Wednesday and is expected to see Xi tighten his grip on power.

Though craving recognition abroad—and perhaps even more importantly at home—as a great power, China under Xi is also aware of suspicions over its actions and regularly issues verbal reassurances. For example, Beijing touts its trillion-dollar “One, Belt, One Road” initiative, aimed at boosting its ties to Europe and Africa, as a “win-win” strategy to lift millions out of poverty.