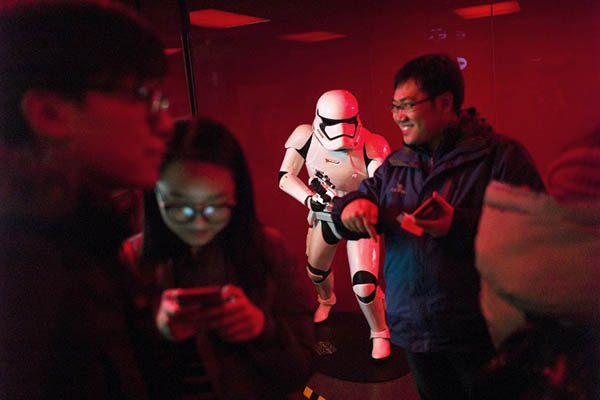 The latest installment of ‘Star Wars’ evokes memories of a country that tried to use the original movie to encourage scientific progress.

A long time ago in a country far, far away, Chinese authorities managed to obtain a copy of America’s ultimate cultural weapon, a blockbuster movie with enough special effects to wow an entire planet. Summoned to a small theater in the southern city of Guangzhou in 1980, artist Song Feideng was shown Star Wars and instructed to transform it into a traditional Chinese comic book, known as a “lianhuanhua,” to promote scientific achievement to China.

Song was one of the first people in China to see George Lucas’s magnum opus, at a time when it was still banned—a marked contrast to the status of the series’ most recent installment in a market Hollywood increasingly sees as crucial to success.

“The objective was to take the world’s advanced science and popularize it in China,” Song, who worked for a state-owned publisher at the time, told AFP. He replaced the movie’s X-wing spacecraft with Soviet rockets and jet fighters. In one illustration, Luke Skywalker wears a cosmonaut’s bulky spacesuit, while rebel leaders are dressed in Western business suits. Darth Vader appears alongside a triceratops.

At the time, China was emerging from the isolation of the Mao Zedong era and Star Wars had still not been granted a release by Communist authorities, three years after it hit Western cinemas. The movie “was very novel, very exciting,” Song said, adding that he felt as if he had seen a “glimpse of the world.”

The project came amid a brief flowering of Chinese science fiction following Mao’s decade-long Cultural Revolution, when the arts were reduced to glorifying the Communist Party. Mao’s decision to send intellectuals to work in the countryside had badly affected basic scientific research.

Song spent the period on the then poverty-stricken Hainan island, producing propaganda slideshows.

Science fiction has had a fraught history in China, where genre pioneer Ye Yonglie once called it “one of the barometers of the political climate.”

Shortly after the 1977 U.S. release of Star Wars, the Communist Party mouthpiece the People’s Daily attacked it as a fantasy that demonstrated how Americans’ “dissatisfaction with reality” had pushed them to “seek comfort in an illusory fairyland.”

But the following year, as China began to reopen to the world, Beijing declared sci-fi critical to rehabilitating the country’s sciences, releasing a flood of almost 1,000 new titles.

A translated Star Wars script appeared on the mainland as early as March 1979, while Song’s comic is believed to be the first illustrated standalone. It sold briskly, he recalled. “I could buy a TV, a stereo… it was just unimaginable.”

But the initial hopes of the country’s “reform and opening” quickly soured as artists began to criticize the government.

Speculative stories imagining a China without communism were not the plotlines authorities were looking for, and they moved to ban science fiction again. Song’s own works—he had moved into hard-boiled noir comics featuring private eyes, femme fatales, and a keen appreciation for the female form—were criticized for “spiritual pollution.”

It was not until 1985 that Star Wars first appeared on Chinese screens, at a multi-city American film festival that drew millions of viewers. By the late 1980s, it was airing on local television stations, while pirate copies circulated on video.

But the movies never developed the broad, devoted fan base they have enjoyed elsewhere, and most Chinese learned of the franchise through the prequels—much maligned in the West.

Song’s comic went viral ahead of the release of the latest installment, The Force Awakens, but a midnight premiere in Beijing this month had a mostly foreign audience. Even so the movie raked in $90 million in its first week, according to film data website China Box Office.

The world’s second-largest economy is also its second-biggest film market and Hollywood is keen to satisfy its moviegoers, who have shown a deep appetite for Western science fiction such as Avatar or the Transformers series. But Beijing has shown signs of resistance to that hunger, part of a wider pushback against the influence of “foreign culture.”

In 2011, the State Administration of Radio, Film and Television issued an edict discouraging movies featuring “fantasy” and “time travel” among other “bizarre plots.” More recently, President Xi Jinping instructed artists to abandon “naive sensual amusement” and instead use “true-to-life images to tell people what they should affirm and praise.”

Song has split the difference: his latest paintings of scantily-clad models incorporate Party-friendly themes. An illustration of a mostly naked woman, he says, symbolizes the beauty of the South China Sea. The traditional Chinese junk boat in the background, he adds, shows that the region has been Chinese since ancient times, echoing the party line on a bitter territorial dispute.