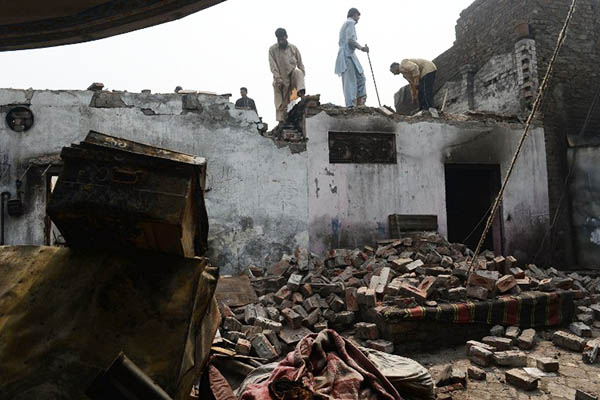 The remains of a house burnt to the ground by a mob in Lahore, March 2013. Arif Ali—AFP

Anger over Sawan Masih’s alleged blasphemy resulted in a riot on the Joseph Colony neighborhood of Lahore last year.

An Additional District and Sessions Court sentenced a Christian man to death for blasphemy on Thursday, his lawyer said, over an incident that triggered a riot in Lahore.

Sawan Masih was convicted of insulting Islam’s Prophet during the course of a conversation with a Muslim friend in the Joseph Colony neighborhood of the city in March of last year. More than 3,000 Muslims rampaged through Joseph Colony, torching some 100 Christian homes, after the allegations against Masih emerged.

Naeem Shakir, one of Masih’s lawyers, said: “The judge has announced the death sentence for Sawan Masih. We will appeal the sentence in the Lahore High Court.”

Verdict and sentence were announced inside the jail where Masih was held, Shakir said.

The country has had a de facto moratorium on civilian hangings since 2008. Only one person has been executed since then, a soldier convicted by court martial.

Pakistan has extremely strict laws against defaming Islam, including the death penalty for insulting Islam’s Prophet, and rights campaigners say they are often used to settle personal disputes.

Masih has maintained his innocence and argued the real reason for the blasphemy allegation was a property dispute between him and his friend.

No one was killed in the rampage through Joseph Colony last year but the incident highlighted the sensitivity of blasphemy in Pakistan. Some 97 percent of the 180 million population are Muslim, and even unproven allegations can trigger a violent public response.

Earlier this month an angry mob set fire to a Hindu temple in Larkana over the alleged desecration of a Quran.

A recent report from a U.S. government advisory panel said Pakistan used blasphemy laws more than any other country in the world, listing 14 people on death row and 19 others serving life sentences for insulting Islam. In January an elderly Briton was sentenced to death for blasphemy, though his lawyers said the court had failed to consider “overwhelming” evidence of his mental illness.

Oh for God’s sake, stop this madness. Come on people, I know we all hold the prophet up in high esteem but we need to follow his behavior. He brought presents to the people who insulted him and threw garbage at him. People have historically converted to Islam because of the good behavior of Muslims. All were doing with this stupid law is showing the world how intolerant we are. We need to respect human rights.

This is just the tip of the ice berg. Any one can be accused and then they are screwed.
The court will not let you show proof? 100 homes burned because one man says another
man committed blasphemy? Pakistan considers this justice? I say bomb the whole country
and when the world asks why we say they committed blasphemy!

Lord, you are the creator of the Heavens and the earth. The courts where this decision was made in, is made by the people and their feelings. Little do they know, there is a God, my God!
Father, God of the Heavens and earth, I claim your wrath on the decision makers in Jesus name. Amen!
People, we are not God to decide a man’s fate, but he is. We are only bubbles of air will pop when he wants. Father I claim your peace to his loved ones and let the Heavens open up and the fire fall onto the ones responsible.