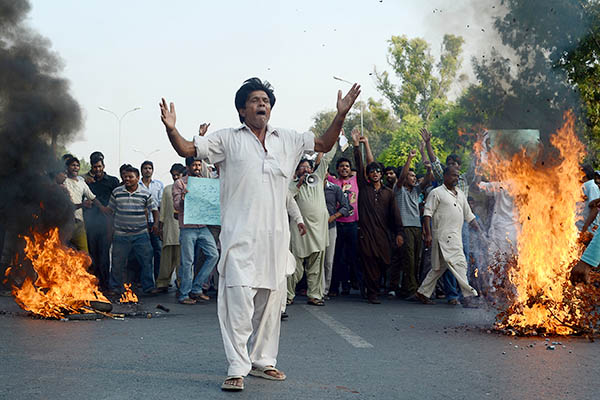 Members of religious minority worry that Sunday’s bombing will lead to more attacks on them in future.

The death toll from a double suicide bombing on a church in Pakistan rose to 81 on Monday, as Christians protested across the country to demand better protection for their community.

The attack on All Saints Church in Peshawar after a service on Sunday, claimed by a Taliban faction, is believed to be the deadliest ever to target Pakistan’s small Christian minority.

Dr. Arshad Javed of the city’s Lady Reading hospital said the death toll had risen to 81 overnight, including 37 women. A total of 131 people were wounded.

Christians demonstrated in towns and cities around Pakistan, including Islamabad, Lahore, Karachi, Peshawar and Faisalabad, to protest against the violence and demand better protection from the authorities.

Paul Bhatti, the president of the All Pakistan Minorities Alliance (APMA), who was minister for national harmony in the last government, said the attack was the deadliest ever targeting Christians in Pakistan.

“We are very clear that it was an incident of terrorism. Christians are not the only target of terror, whole Pakistan is a victim of terrorism,” said Bhatti, whose brother Shahbaz was assassinated in 2011 for speaking out against the country’s blasphemy laws. “Terrorists are targeting everyone, they are beasts. The time has come for Pakistan to take an action against them.”

He added Christian schools would close for three days of mourning.

Senior Peshawar police official Najeeb-ur-Rehman said security around churches in the city would be stepped up, but survivors of the bombing spoke of their fears of further violence.

“We had very good relations with the Muslims—there was no tension before that blast, but we fear that this is the beginning of a wave of violence against the Christians,” said Danish Yunas, a Christian driver wounded in the blast. “We fear there will be more of this in the future.”

Prime Minister Nawaz Sharif strongly condemned the “cruel” attack, saying it violated the tenets of Islam and Pope Francis also spoke out against the violence, calling it “a bad choice of hatred and war.”

The small and largely impoverished Christian community suffers discrimination in the overwhelmingly Muslim-majority nation but bombings against them are extremely rare. The 400 or so worshippers were exchanging greetings after the service when the bombers struck, littering the church with blood, body parts and pages from the Bible. The walls were pockmarked with ball bearings that had been packed into the bombs to cause maximum carnage in the busy church.

Sectarian violence between majority Sunni and minority Shia Muslims is on the rise in Pakistan but Sunday’s bombings will fuel fears the already beleaguered Christian community could be increasingly targeted.

A faction of Pakistan’s umbrella Taliban movement, Jandullah, claimed responsibility for Sunday’s attack, saying it was to avenge U.S. drone strikes on Taliban and Al Qaeda operatives in the country’s tribal areas along the Afghan border. “We carried out the suicide bombings at Peshawar church and will continue to strike foreigners and non-Muslims until drone attacks stop,” said Ahmad Marwat, a spokesman for the group.

Prime Minister Sharif has called for peace talks with the Taliban and two weeks ago won backing from the country’s main political parties. But after a week that began with the militants killing an Army general in the northwest and ended with the church attack, some are questioning whether dialogue is the right approach.

Khyber-Pakhtunkhwa is a deeply conservative province bordering the tribal districts along the Afghan frontier, which are home to Taliban and Al Qaeda militants. Provincial lawmaker Ghauri said there were about 200,000 Christians in the province, of whom 70,000 lived in Peshawar.

Only around two percent of the country’s population of 180-million is Christian. The community complains of growing discrimination.

Islam is a complete system.Islam has religious, legal, political, economic and military components. The religious component is a beard for all the other components.Islamization occurs when there are sufficient Muslims in a country to agitate for their so-called “religious rights.”When politically correct and culturally diverse societies agree to “the reasonable” Muslim demands for their “religious rights,” they also get the other components under the table.Here’s how it works (percentages source CIA: The World Fact Book (2007)).As long as the Muslim population remains around 1% of any given country they will be regarded as a peace-loving minority and not as a threat to anyone. In fact, they may be featured in articles and films, stereotyped for their colorful uniqueness:United States — Muslim 1.0%Australia — Muslim 1.5%Canada — Muslim 1.9%China — Muslim 1%-2%Italy — Muslim 1.5%Norway — Muslim 1.8%At 2% and 3% they begin to proselytize from other ethnic minorities and disaffected groups with major recruiting from the jails and among street gangs:Denmark — Muslim 2%
Germany — Muslim 3.7%United Kingdom — Muslim 2. 7%Spain — Muslim 4%From 5% on they exercise an inordinate influence in proportion to their percentage of the population.They will push for the introduction of halaal (clean by Islamic standards) food, thereby securing food preparation jobs for Muslims. They will increase pressure on supermarket chains to feature it on their shelves — along with threats for failure to comply. (United States).France — Muslim 8%Philippines — Muslim 5%Sweden — Muslim 5%Switzerland — Muslim 4.3%The Netherlands — Muslim 5.5%Trinidad & Tobago — Muslim 5.8%t this point, they will work to get the ruling government to allow them to rule themselves under Sharia, the Islamic Law. The ultimate goal of Islam is not to convert the world but to establish Sharia law over the entire world.When Muslims reach 10% of the population, they will increase lawlessness as a means of complaint about their conditions (Paris — car-burnings). Any non-Muslim action that offends Islam will result in uprisings and threats (Amsterdam – Mohammed cartoons).
Guyana — Muslim 10%India — Muslim 13.4%Israel — Muslim 16%Kenya — Muslim 10%Russia — Muslim 10-15%After reaching 20% expect hair-trigger rioting, jihad militia formations, sporadic killings and church and synagogue burning:Ethiopia — Muslim 32.8%At 40% you will find widespread massacres, chronic terror attacks and ongoing militia warfare:Bosnia — Muslim 40%Chad — Muslim 53.1%Lebanon — Muslim 59.7%From 60% you may expect unfettered persecution of non-believers and other religions, sporadic ethnic cleansing (genocide), use of Sharia Law as a weapon and Jizya, the tax placed on infidels:Albania — Muslim 70%Qatar — Muslim 77.5%Sudan — Muslim 70%After 80% expect State run ethnic cleansing and genocide:Bangladesh — Muslim 83%Egypt — Muslim 90%Gaza — Muslim 98.7%Indonesia — Muslim 86.1%Iran — Muslim 98%Iraq — Muslim 97%Jordan — Muslim 92%Morocco — Muslim 98.7%Pakistan — Muslim 97%Palestine — Muslim 99%Syria — Muslim 90%Tajikistan — Muslim 90%Turkey — Muslim 99.8%
United Arab Emirates — Muslim 96%100% will usher in the peace of “Dar-es-Salaam” — the Isla mic House of Peace — there’sAfghanistan — Muslim 100%Saudi Arabia — Muslim 100%Somalia — Muslim 100%Yemen — Muslim 99.9%Of course, that’s not the case. To satisfy their blood lust, Muslims then start killing each other for a variety of reasons.”Before I was nine I had learned the basic canon of Arab life. It was me against my brother; me and my brother against our father; my family against my cousins and the clan; the clan against the tribe; and the tribe against the world. And all of us against the infidel. — Leon Uris, “The Haj”It is good to remember that in many, many countries, such as France, the Muslim populations are centered around ghettos based on their ethnicity. Muslims do not integrate into the community at large. Therefore, they exercise more power than their national average would indicate.Adapted from Dr. Peter Hammond’s book: Slavery, Terrorism and Islam: The Historical Roots and Contemporary Threat.Pakistan when came into existence in 1947 had 27% non-Muslims. Fast forward to 2013 – only 4% are non-Muslims. Rest have been converted, raped, killed .

Blessed are they that have been persecuted for righteousness’ sake: for theirs is the kingdom of heaven.