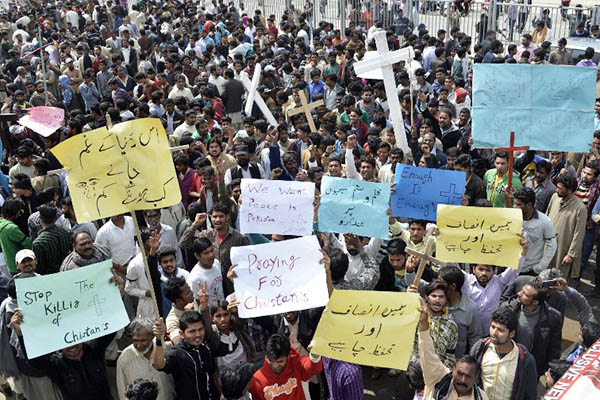 Some 5,000 Christians rallied in Lahore on Monday, blocking roads and shouting anti-government slogans in a second day of protests against twin Taliban suicide bombings of churches that killed 14 people.

Sunday’s attacks in the Youhanabad neighborhood sparked mob violence in which two other suspected militants were killed, with Christians smashing up cars and a bus station. More than 1,000 police were deployed in the neighborhood Monday, where many protesters had armed themselves with clubs, but the situation remained calm.

“We are on the roads to get justice, we want protection,” said 50-year-old protester Maqbool Bhatti. Bhatti, a government employee, said authorities had failed to take adequate security measures. “There was no proper security on Sunday, the government should protect all churches,” he said. Asher Kanwal, 30, added: “Christians are protesting because they are worried of their future.”

Christians, who make up around two percent of Pakistan’s mostly Muslim population of 180 million, have been targeted recent years, often over allegations of profanity regarding the Quran or Islam’s Prophet.

Sunday’s attacks were the worst on the community since a devastating double suicide-bombing in Peshawar in September 2013 killed 82 people. That came months after more than 3,000 Muslim protesters torched some 100 houses as they rampaged through Joseph Colony, another Christian neighborhood of Lahore, following blasphemy allegations against a Christian man.

Christians volunteers established their own security checkpoints on Sunday, tying ropes across the roads leading into Youhanabad and patting down worshippers who had come to offer prayers for the dead ahead of funerals planned for Tuesday. Some carried placards with slogans such as “Why do you kill us?”, “Stop killing Christians,” and “Let us live.”

Special prayers were meanwhile planned at churches throughout the country, as well as candle-lit vigils by Christian groups and members of civil society.