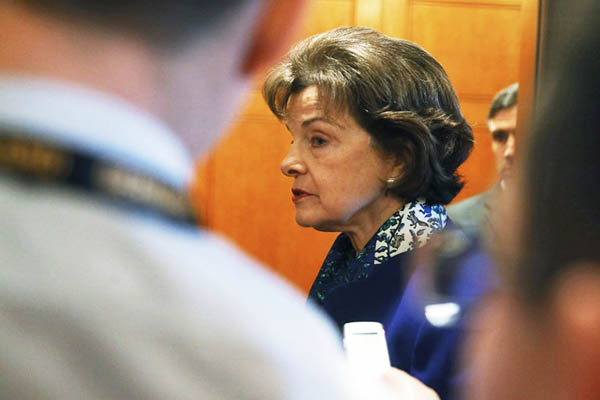 U.S. Sen. Dianne Feinstein walks off the Senate floor after speaking about the CIA. Mark Wilson—AFP

Classified 6,300-page document reveals that torture yielded little actionable intelligence beyond what had been obtained through interrogation.

A damning Senate report concluded that the CIA misled Congress and the American public by downplaying the severity of its interrogations and overstating intelligence gleaned from the sessions, The Washington Post said Monday.

Several officials familiar with the classified 6,300-page document, years in the making, said it detailed the brutality of an enhanced interrogation program that yielded little actionable intelligence beyond what was already obtained from detainees before they were subjected to the objectionable techniques.

“The CIA described [its program] repeatedly both to the Department of Justice and eventually to Congress as getting unique, otherwise unobtainable intelligence that helped disrupt terrorist plots and save thousands of lives,” a U.S. official briefed on the document told the daily. “Was that actually true? The answer is no.”

Officials also spoke of the abuses undertaken within the vast system of secret detention sites to which terror suspects were taken and interrogated. The abuse often took place under brutal conditions, including the previously undisclosed method of repeatedly dunking suspects in ice water—until President Barack Obama ordered the system dismantled in 2009.

Classified files reviewed by the Senate Intelligence Committee’s investigators, who put together the report, showed that CIA employees left the agency’s secret black site in Thailand, disturbed by the abuses that were being administered there. Officials at CIA headquarters ordered the harsh interrogation techniques to continue “even after analysts were convinced that prisoners had no more information to give,” the Post said.

The records were said to make it clear that the CIA obtaining key intelligence against Al Qaeda, including information that led to the killing of Osama bin Laden in 2011, had little to do with the so-called “enhanced interrogation techniques.”

One official said nearly the entirety of valuable threat-related information from Al Qaeda operative Abu Zubaida, captured in Pakistan in 2002, was obtained during questioning by an FBI agent while Zubaida was in hospital in Pakistan—before he was interrogated by the CIA, whose agents waterboarded him 83 times.

The explosive account comes as Senate Intelligence Committee Chairwoman Dianne Feinstein pushes to get parts of the report declassified and made public. Her committee is expected to vote Thursday on whether to send the report’s executive summary and key conclusions and recommendations, a total of about 400 pages, to the White House for declassification.

Committee staffers spent countless hours pouring over more than six million pages of documents in collating what has become one of the most comprehensive oversight projects in congressional history. Their report has caused a deep rift between the intelligence agencies and the Senate panel tasked with conducting oversight of the spy activities, with each side accusing the other of potentially criminal violations related to accessing computer systems used during the investigation.