Home Latest News Clinton Promises an America for Everyone

Clinton Promises an America for Everyone 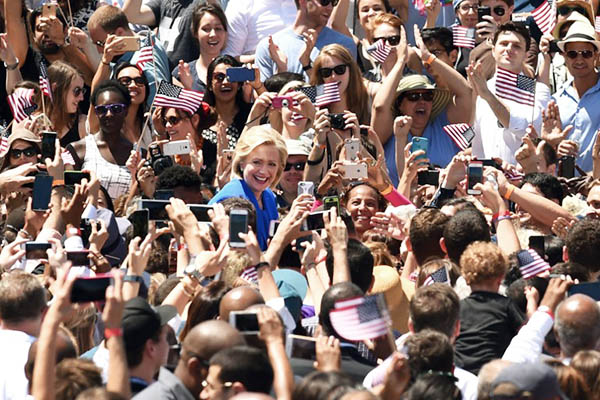 Hillary Clinton launched Saturday her bid to become the first woman president of the United States, unveiling a progressive platform calling for tax breaks for the struggling middle class and universal preschool.

Dressed in an electric blue pant suit, a confident and relaxed 67-year-old Clinton outlined a vision of equal opportunity, civil rights for all and an America leading the world in the first major rally of her campaign. Addressing several thousand ardent supporters in New York, the home turf where she served as senator, she emphasized her four decades in public service as the most qualified candidate to lead the country. Clinton emphasized her security and foreign policy credentials, promised to build the economy, strengthen families and communities, get unaccountable money out of politics and protect the country from threats.

At the end, she was joined on stage by husband and former president Bill, their daughter Chelsea and their son-in-law Marc Mezvinsky, embracing, holding hands and waving to a rapturous sea of waving flags on Roosevelt Island.

“I may not be the youngest candidate in this race. But I will be the youngest woman president in the history of the United States,” she said to cheers and applause. “And the first grandmother as well!”

Clinton promised tax relief to small business owners, to make America the clean energy superpower of the 21st century. She vowed to make preschool and quality child care available to every child, make college more affordable by lifting “the crushing burden” of debt, equal pay for women, raising the minimum wage and an end to discrimination against the LGBT community.

Clinton promised to maintain America’s global leadership, to counter threats posed by Russia, North Korea and Iran, cyber-attacks and by the Islamic State extremist group in Syria and Iraq.

“America can’t succeed unless you succeed, that is why I am running for president of the United States,” she said to chants of ‘Hillary, Hillary.’ “Prosperity just can’t be for CEOs and hedge fund managers. Democracy can’t be just for billionaires.”

She launched a stinging attack on the Republican party, painting her conservative foes as out of touch with a diverse electorate, and lampooned their tax breaks in favor of the super wealthy at the expense of the hard-working middle class such as nurses and small-business owners. “I am running to make the economy work for you and for every American,” she said.

In a deeply personal speech, she drew on the disadvantaged background of her mother, who was forced to work as a maid aged 14 after being abandoned, and told voters that she understood first hand their problems. “My mother taught me that everybody needs chance and a champion. She knew what it was like not to have either one,” Clinton said. “That’s why I believe with all my heart in America and in the potential of every American to meet every challenge, to be resilient no matter what the world throws at you, to solve the toughest problems.”

She cracked jokes in an effort to present a more human touch, met by whoops of delight, that referenced a lifetime in public service. She spoke on Roosevelt Island, named after America’s great World War II and New Deal president Franklin D. Roosevelt, and rooted her campaign in his legacy, as well as that of her husband and Barack Obama. “I’ve been called many things by many people,” she said to laughter. “Quitter is not one of them,” Clinton said to applause.

“Like so much else in my life, I got this from my mother. When I was a girl, she never let me back down from any bully or barrier.”