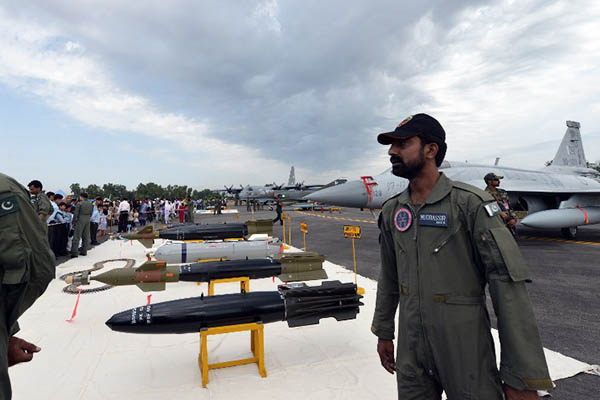 Pakistan has traditionally commemorated Sept. 6 as Defense Day and Sept. 7 as Air Force Day. Both days, over the years, have developed certain low-pitched rituals: wreath-laying at the tombs of martyrs of Pak-Indo Wars, some small ceremonies at main garrisons and a few songs from 1965. The Air Force Day sees PAF equipment and some airfields opened to the public, with families coming to watch an occasional airshow—more like a festive, family outing than a show of hyper-nationalism.

And then secular India elected Narendra Modi, a man whose RSS [Rashtriya Swayamsevak Sangh] credentials are no secret, a man who is blamed for the Gujarat carnage, a man marketed to have a 56-inch chest, even though his tailor says something else, a man who likes to be photographed performing shastra pooja (worshipping of weapons).

This man decided to ‘celebrate’ India’s ‘victory’ over Pakistan in 1965, the celebrations stretching over a full month.

Unthinkingly, we decided to change the nature of our traditional commemoration into high-pitched ‘celebrations’ spread over a week, culminating with a big show on Sept. 6.

The military’s public-relations directorate, ISPR, which has become very suave, put the wheels in motion. TV anchors were selected and taken to various places, highlighting the military’s good work, its sacrifices, and its central role in keeping this country intact.

The anchors, fascinated by military equipment and platforms, and enjoying the proximity to what normally remains inaccessible, presented the narrative that ISPR deftly fed them. In their enthusiasm, and lacking any knowledge of military and operational strategies, they remained ignorant of the fact that the military is merely one component of a nation’s strength and its own effectiveness is consequent to a state’s political stability and economic clout.

The result was obvious. The military was celebrated, without any analytical questions asked about either 1965 or even why we are today fighting an internal war and what has brought us to this pass. Or, more broadly, that a state that can only be kept together by its military is a weak state and lacks other cohesive elements that must make up a strong state. But that’s another debate.

Commemorations are about sober reflections; celebrations are about the heat of the moment. Reflection pays homage to sacrifices but doesn’t shy from asking questions. The future of a nation is intrinsically linked to its past. The future is also guided by whether a collection and its leaders have learnt any lessons from the past.

There are times when people have to fight. But fighting can never be taken non-seriously. Real-world fighting is not a video game. It involves generating violence. The decision to start a war means sending young men and women to their deaths. No one in his sane mind can take such a decision without serious reflection.

But because we chose to ‘celebrate’, we forgot to commemorate.

One central question is about winning. As the two nations celebrated, both claimed to have won the war. That’s the problem of bequeathed narratives. That is also the problem when one side hasn’t totally lost out to the other.

The truth is, neither side won. Neither achieved its stated objectives. The war got stalemated with both sides winning tactical victories in theaters of their advantage and then went into a ceasefire agreement, which, three months from thence, was cemented at Tashkent.

But ’65 was not one war. It was two wars. One began and was fought across the ceasefire line in a disputed territory that remains disputed. The second was fought along a recognized, undisputed international border.

The first didn’t start on Sept. 6. It began in the first week of August with Pakistan’s Operation Gibraltar. Pakistan Army regulars and irregulars crossed into Indian-occupied Kashmir to help an indigenous Kashmiri uprising. The plan was based on flawed intelligence reports. Any local unrest hadn’t reached critical mass, which could have been exploited by the operation. This writer’s father, a young captain then, told him that far from the local population helping them, they began reporting on the movement and locations of the forces that had ingressed into Indian-occupied Kashmir.

India delivered its own riposte to Gibraltar and met with initial success in Haji Pir and Titwal. By Sept. 1, Pakistan had launched Operation Grand Slam in the south, crossing the CFL with the intention of making a dash for Jammu-Katuha Road, cutting off India’s ‘chicken neck’ and isolating the Indian troops in Indian-occupied Kashmir from the Indian mainland.

The offensive was extremely successful. Indian defenses fell quickly to advancing Pakistani troops at Chhamb and Jorrian. The next objective was Akhnoor. With Akhnoor in Pakistani hands, the objective would have been achieved. From then on it would be a matter of consolidation. Akhnoor didn’t fall to us and with that hangs the mystery of why command was changed at that moment. But that’s not an issue I am interested in here.

My point is different. While we selected a strategic sector for our offensive, we forgot that it was extremely vital to India’s interests to not let us cut Indian-occupied Kashmir off from the Indian mainland. Strategic and vital enough for India to do something, anything to relieve pressure, including widening the conflict even if it meant violating a recognized border.

Years ago, while reading the account of the war by former Maj. Gen. Shaukat Riza, I came across a line that has stuck with me since: “Somehow we had convinced ourselves that our strategic objectives are holier than India’s.”

Then-Indian prime minister Lal Bahadur Shastri’s generals told him that the only way pressure could be relieved was by violating the international border. Some accounts say that Shastri said that they must do whatever was needed and that as far as he was concerned, Pakistan had already violated the border.

The obvious choice was Lahore and the other axis of advance toward Sialkot. That’s the second war, which began on Sept. 6. India wanted to take Lahore and advance to the Grand Trunk Road toward Gujranwala. Its other thrust toward Sialkot was meant to take that town and achieve a link-up of forces. It failed in achieving these objectives.

Both sides, operationally, made remarkable blunders. But that’s another story.

The point here is a broader one. No one won, which is why both can claim victory. I guess both have some reason to celebrate their respective battles. For myself, I’d much rather commemorate.

Editor’s Note: At the author’s insistence, India-administered Kashmir has been cited as “Indian-occupied Kashmir,” a term that this publication does not subscribe to. For purposes of objectivity, Newsweek Pakistan always refers to the relevant sides of Kashmir as “Pakistan-administered” or “India-administered.”