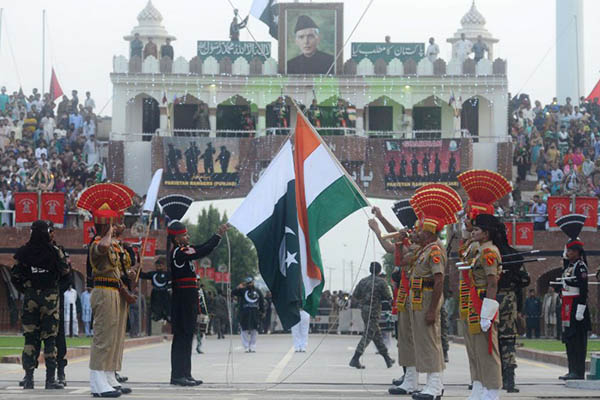 With tit-for-tat air raids across their hair-trigger border pushing India and Pakistan closer to all-out conflict, growing international concern is being fueled by fears that the rivals are running out of escape routes, analysts say.

While both sides have insisted they want to avoid escalation or war, the lack of direct government-to-government contact offers no clear way out of the crisis, and the United States—so often the peace broker in past showdowns—has shown no signs of taking up such a pivotal role this time.

Prime ministers Imran Khan of Pakistan and India’s Narendra Modi—who is on the verge of calling a general election—are under enormous domestic pressure not be seen to give any ground. Public opinion in India, already at boiling point over a suicide attack in Kashmir that set off the hostilities, has been further inflamed by the capture of a downed Indian air force pilot, and video images showing him being slapped by a mob before being rescued by Pakistani soldiers.

“The real danger is the crisis slipping beyond the two governments’ control,” said Richard Gowan, a New York-based specialist on international peace and security and fellow at the U.N. University. “There is a risk that another terrorist attack or outbreak of communal violence could suddenly make diplomacy harder.”

India has yet to respond to Khan’s suggestion of direct talks, and the Pakistani leader’s offer was couched in an ominous warning about the potentially catastrophic consequences of any further escalation between the nuclear-armed rivals “Can we afford any miscalculation with the kind of weapons that we have and you have?” Khan said in a televised national address on Wednesday.

The United States, China, Russia and every major power has called for “restraint,” but so far neither side has made any concrete move to defuse the situation. “We are getting mixed signals, there is nothing reassuring yet,” said one western diplomat in New Delhi.

Indian and Pakistani fighter planes fought a brief skirmish on Wednesday over Kashmir. Pakistan said it had downed two Indian fighters, while India confirmed it had lost one plane and claimed it had shot down a Pakistani jet. The spokesman for Pakistan’s armed forces denied Islamabad had lost any plane.

In an address to ruling party workers on Thursday, Modi said “India will fight as one” and added that the entire country was “standing with our soldiers.”

“While it is now much more politically difficult for Modi not to militarily respond and instead enter crisis de-escalation talks with Pakistan, he must still prevent this slide toward general war,” said Frank O’Donnell, a South Asia specialist at the Stimson Center, a U.S. think tank.

The fate of the captured India pilot could be key, with Pakistan saying on Thursday it would consider returning him if it would help defuse the situation. And despite the dangerous surge in tensions, observers in the two countries, who have fought three wars since their independence and angry split in 1947, noted that India and Pakistan are used to finding ways to step back from the brink.

“There is a tendency to say that because there has been downing of planes claimed on both sides, that suddenly nuclear war is likely,” said Dhruva Jaishankar, a foreign policy expert at Brookings India in New Delhi. “That completely overlooks the past when India and Pakistan have found ways to manage escalation. The question both are facing at this time is how they can sell to their domestic audiences the fact that they achieved the defense of their country.”

In Pakistan, security analyst and columnist Farrukh Pittafi said “the next few days are important in terms of normalization of the situation because we have one Indian pilot POW.” Khan is still offering dialogue and “the Pakistani leadership has effectively shown its ability to defend the country by striking back. Now a better sense should prevail,” said Pittafi.

Even if the two sides can talk their way out of this showdown, the signs are not good for Kashmir, where it all started with the killing of 40 Indian paramilitaries in a suicide bomb attack on Feb. 14. Shelling across the ceasefire line in the Himalayan region, fought over since 1947, has intensified since this week’s raids.

Jane’s Intelligence Weekly has warned there is a “high risk” of any escalation being focused in the forgotten conflict zone where tens of thousands have died in an uprising on the Indian side launched in 1989.