Controversy in Turkey Over ‘Anti-Army’ Billboards 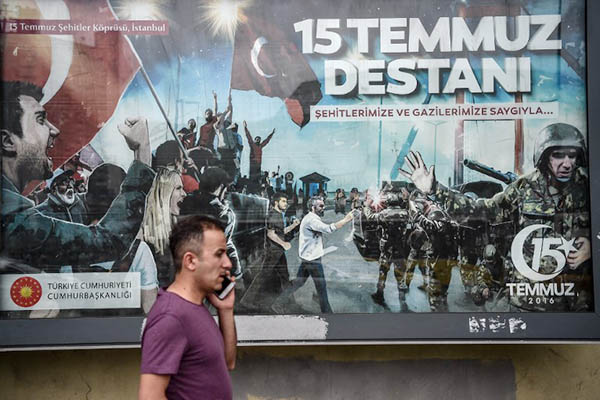 Giant billboards with paintings representing the defeat of last year’s failed coup have sparked controversy in Turkey, with critics saying they are defaming the once-powerful military.

The posters—carrying a presidential logo—have sprung up in Istanbul and other Turkish cities, showing people confronting pro-coup soldiers on the night of July 15, 2016. They are part of intense publicity campaign by the authorities under President Recep Tayyip Erdogan to remind people of the importance of the defeat of the bid to oust the government, ahead of commemorations of the first anniversary on Saturday.

One shows a giant painting of a soldier with his hands over his head in dismay as he is angrily confronted by a crowd of people. But some have seen the posters as discrediting the army—the second largest in NATO and for years a pillar of the modern Turkish state.

While half of Turkey’s pre-coup contingent of generals were arrested or dismissed in the purge that followed the coup bid, only a tiny proportion of the rank and file were implicated. The deputy leader of the secular opposition Republican People’s Party (CHP) slammed the billboards, saying they were encouraging “enmity against the army” and insulting the Turkish armed forces.

“The soldiers seen in the posters are not Turkish. They used pictures of soldiers found from foreign websites,” Bulent Tezcan claimed, blasting the images as an “embarrassment.”

The rightwing Nationalist Movement Party (MHP), an ally of the government, also opposed the billboards. “They don’t reflect the spirit of July 15,” the MHP’s Erkan Akcay said.

The controversy went viral on social media as well, with hashtags “TSK is our honor, TSK is our pride” widely circulated on Twitter. TSK is the Turkish abbreviation for the Turkish Armed Forces. One Twitter user wrote: “What kind of posters are they? To be a Turkish solider is an honor. Every Turk is born a soldier.”

The controversy has erupted just ahead of the major commemorations planned Saturday to celebrate the defeat of the coup bid, blamed by the government on U.S.-based Muslim preacher Fethullah Gulen, who denies the charges. The bid to seize power claimed 249 lives, not including the plotters. But Prime Minister Binali Yildirim dismissed the criticism on Friday, saying that the posters did not aim to target the army.

“There’s nothing to be disturbed about here,” he said, quoted by Turkish media. He said those soldiers involved in the coup were not true members of the military but “terrorists disguised in soldiers’ uniforms.”

“They are not representing the Turkish armed forces,” he said, calling them “murderers.”

Ahmet Hakan, columnist in the Hurriyet newspaper, slammed the government for picturing “crying and submissive soldiers.” He said that it would have been better to have made posters explaining how Gulen had been allowed to build up so much influence in Turkey through his past cooperation with the authorities.