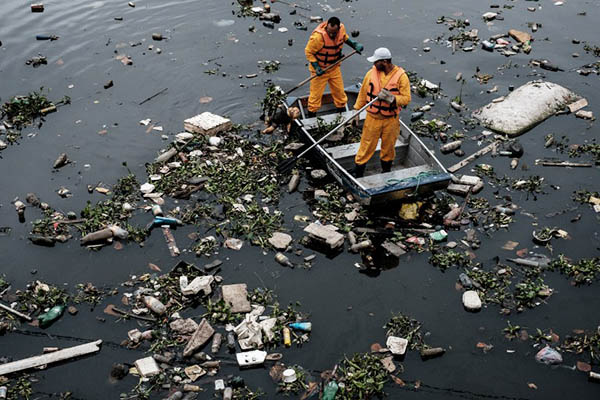 Sailors worry over large objects that could snare or even damage boats in upcoming competition.

When Olympic sailors compete in Rio the cameras will show a made-for-television scene of sparkling tropical waters and mountains. Luckily, the billions of viewers won’t catch the revolting stink.

More than nine million people live in Rio and towns around the rest of Guanabara Bay. At best only half the sewage they produce is treated before it pours into the city’s watery heart. Incredibly, the fact that sailors will compete in a giant cesspit—which Brazilian researchers say contains drug-resistant superbacteria—is not their main worry. It’s the big, floating stuff capable of snaring or even damaging boats and medal dreams that keep athletes like Kahena Kunze and her 49er crewmate Martine Grael up at night.

Because garbage collection in greater Rio is no better than the sewage treatment, the bay brims with plastic bags, bottles, discarded furniture and dead animals.

The New York Times published a picture this week of a bloated human body in the bay. Another body part washed up on Copacabana beach, just outside Guanabara, in June. “It’s shameful,” Kunze told AFP.

As part of its winning 2009 bid to host the Olympics, Rio promised to treat 80 percent of the pollution, a task requiring enormous, expensive infrastructure improvements. Having completely failed to deliver, Rio opted for emergency measures.

A fleet of 12 trash-collecting boats called “eco-barcos” have spent months patrolling the bay, plucking an average of 45 tons of rubbish a month—about one and a half tons daily—from the water, according to officials. When the races start, the floating garbage collectors will be out in force.

The first lines of defense, though, are so-called eco-barriers. These are nets placed across 17 rivers entering Guanabara—rivers used by millions of people as garbage dumps and open sewers.

At a an eco-barrier on the River Meriti in the Duque de Caxias neighborhood, there was a soup of plastic, car tires, children’s toys and household appliances including a microwave and a fridge.

Each day, laborers go out in a small aluminum boat, scooping up some pieces and pushing the rest towards the bank, where a digger is used to shovel the debris into a dumpster. It is a dirty, potentially dangerous job performed amid the choking stench of raw sewage, some of which comes from a favela slum next door.

Surveying the scene, Rio’s state secretary for the environment, said eco-barriers are enough to ensure a trouble-free Olympics—or almost. “Is there a chance we’ll have some problem?” he asked. “It’s not impossible. But I am very optimistic that we can guarantee a fair regatta.”

Martine Grael, daughter of five times Olympics medalist Torben Grael, is an outspoken critic of the pollution failure. She was famously pictured on a paddleboard in Guanabara pretending to watch a television she’d just found. Her brother Marco, who is also in the Brazilian sailing team, said all competitors run the same risks, where a simple plastic bag around a centerboard or rudder could ruin a race. “It could happen,” he said. “It’s not something I even like to think about.”

The sailors’ best ally will be mother nature: tidal streams keep areas picked for the contests relatively clean, while the dry August weather means less rain to wash garbage downstream. So, chances are that the contests will pass off without incident.

“But the Games will go away and the pollution will stay,” said Torben Grael, who now coaches the Brazilian sailing team. “We were hoping for something better” from the Olympics, he said sadly. “That’s not going to happen.”