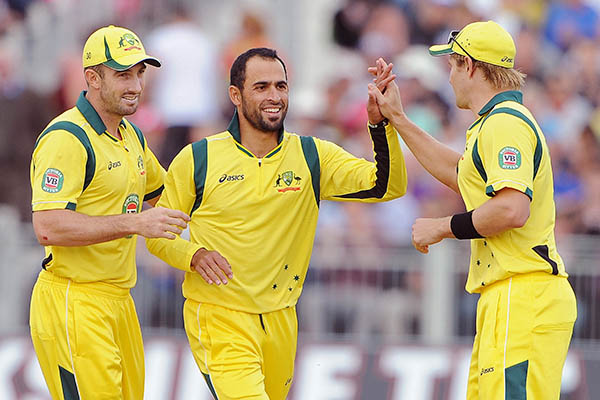 Cricket Australia chief James Sutherland has lashed out at “racist comments” directed at Muslim Fawad Ahmed after the leg-spinner asked not to wear a kit displaying the logo of beer brand VB.

Pakistan-born Ahmed, who became an Australian citizen in July after his application was fast-tracked, did not have the logo on his shirt during his international debut in last week’s T20 matches against England.

It emerged Tuesday that he had “expressed discomfort with the conflict this created for him, due to his religious beliefs.”

“Legitimate reason RELIGION, no its not, it’s a game of cricket, not praying at a church,” said one reaction. “It is driven by money and fans not by religious fanatics. Those who don’t like the Australian culture should leave, or keep misguided values to themselves.”

Sutherland said he was disgusted with such comments.

“Cricket Australia would like to express its extreme disappointment over racist comments towards Fawad Ahmed on social media … some of which are falsely attributed to former Australian cricketer Dean Jones,” he said in a statement late Tuesday. “CA does not condone racism in any way, shape or form. CA is fully supportive of Fawad’s personal beliefs and he is a valued and popular member of the Australian cricket team and the wider cricket community.”

South African batsman Hashim Amla, also a Muslim, is another player in a similar situation and has been permitted not to wear the logo of Cricket South Africa sponsor Castle, a beer company, on his kit.

The sensitive issue also reared up in English football with striker Papiss Cisse pulling out of Newcastle United’s pre-season tour this year, saying he was not prepared to promote the club’s sponsors, money-lending company Wonga.

But the Senegal international has since donned a Newcastle shirt featuring the logo after talks with the club and Islamic teachers.

The rise of Ahmed, a former refugee who fled his home in the Pakistan border region near Afghanistan, where he said he was targeted by the Taliban, has seen him become a hero to some in Australia’s immigrant communities.