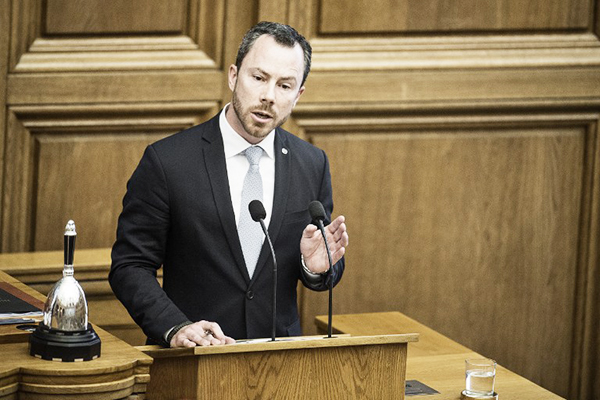 Denmark’s parliament on Tuesday adopted reforms aimed at dissuading migrants from seeking asylum by delaying family reunifications and allowing authorities to seize valuables, under legislation that has sparked widespread condemnation.

The government insists the law is needed to stem the flow of refugees even though Denmark and Sweden recently tightened their borders—a move that prompted Germany and Austria to turn back new arrivals heading for Scandinavia.

After just under four hours of debate, the bill presented by the right-wing minority government of Prime Minister Lars Lokke Rasmussen was approved by 81 of the 109 lawmakers present. Approval had been widely expected, as the main opposition party, the Social Democrats, backed the measures as did two small rightwing parties.

“There’s no simple answer for a single country, but until the world comes together on a joint solution [to the migrant crisis], Denmark needs to act,” M.P. Jakob Ellemann-Jensen of Rasmussen’s Venstre party said during the debate.

The legislation had stirred great controversy, but Rasmussen defended it as “the most misunderstood bill in Denmark’s history.”

International outrage focused on plans to allow police to seize cash and valuables from refugees to help pay for their stay in asylum centers, while rights activists blasted a proposed three-year delay for family reunifications as a breach of international conventions.

Some likened the Danish proposals to the confiscation of gold and other valuables from Jews by the Nazis during the Holocaust.

Rasmussen shrugged off the criticism, seemingly more concerned with opinion polls showing that 70 percent of Danes rank immigration as their top political concern. Social Democrat Dan Jorgensen addressed opponents of the bill, demanding: “To those saying what we are doing is wrong, my question is: What is your alternative? The alternative is that we continue to be [one of] the most attractive countries in Europe to come to, and then we end up like Sweden.”

Copenhagen has often referred to neighboring Sweden as a bad example, where 163,000 asylum applications were submitted last year—five times more than in Denmark relative to their population size. Denmark’s minority government eventually backtracked on parts of the plan to confiscate migrants’ valuables in order to secure wider backing.

Asylum-seekers will now have to hand over cash exceeding 10,000 kroner and any individual items valued at more than that amount, up from the initial 3,000 kroner proposed.

After thorny negotiations with the other parties, Integration Minister Inger Stojberg agreed to exempt wedding rings and other items of sentimental value.

The government points out that Danes seeking to qualify for social benefits sometimes also have to sell their valuables. However, they are not subjected to the kind of searches proposed in the new asylum law.

Once a champion of refugee rights, the Scandinavian country’s goal is now to become “significantly less attractive for asylum-seekers,” Stojberg said.

“The tone in the public debate about refugees and immigrants has undoubtedly become tougher,” Kashif Ahmad, the leader of the National Party, which hopes to enter parliament by targeting the immigrant vote, told AFP.

John Dalhuisen, Europe and Central Asia director at Amnesty International, said the law was “plain wrong” and “a sad reflection of how far Denmark has strayed” from its historic support of international norms in the Refugee Convention. “European states must stop this dismal race to the bottom and begin to meet their international obligations, by upholding refugees’ human rights and dignity,” said Dalhuisen. “Anything less is a betrayal of our common humanity.”

But Marcus Knuth, Venstre’s spokesman on integration issues, said such criticism was unfair. “Denmark continues to be one of the most welcoming and caring places that you can seek asylum in. So the criticism that all of a sudden we were doing something wrong we find highly, highly unfair,” he said. “We simply wish to be put more at par with other European countries so that we are not one of the countries that receive by far the most asylum-seekers.”

Home to 5.6 million people, Denmark registered 21,000 asylum applications in 2015, making it one of the top E.U. destinations per capita.

Criticism had mounted ahead of Tuesday’s vote, with the U.N. refugee agency UNHCR and the Council of Europe questioning compatibility with international conventions. But Rasmussen, whose party won a June election after promising an “immediate slowdown” of Denmark’s refugee influx, was unfazed, arguing in turn that the U.N. Refugee Convention may need to be changed if refugees keep pouring into Europe.

Twenty-seven M.P.s voted against the bill in the one-chamber parliament, including three dissenting Social Democrats. A legislator for Greenland, a Danish territory, abstained and 70 M.P.s did not take part. The bill is scheduled to be signed into law by Denmark’s Queen Margrethe within a few days.