Home Latest News Deaths Due to COVID-19 Cross 3,900 in Pakistan

Pakistan conducted just 21,835 tests for the novel coronavirus in the 24 hours preceding Thursday morning—it’s lowest testing since June 3—against 4,044 new infections, a positivity ratio of 18.5 percent.

The National Command and Operation Center (NCOC), in its daily situation report, claims the country has the capacity to conduct 71,780 tests for COVID-19 per day. According to the World Health Organization, any country with a positivity ratio over 5 percent is likely not testing enough to see the true spread of COVID-19. A key plank of the test, trace and quarantine (TTQ) strategy being touted by the government is to ramp up testing, with WHO suggesting a minimum level of 50,000/day.

According to the data available, the drop in testing is primarily due to a reduction in Punjab and Sindh provinces—both of which tested less than 7,500 in the past 24 hours—though there have been minor reductions in the other provinces as well. Sindh has claimed its testing has reduced due to a staff shortage, but Punjab has yet to justify its reduction. 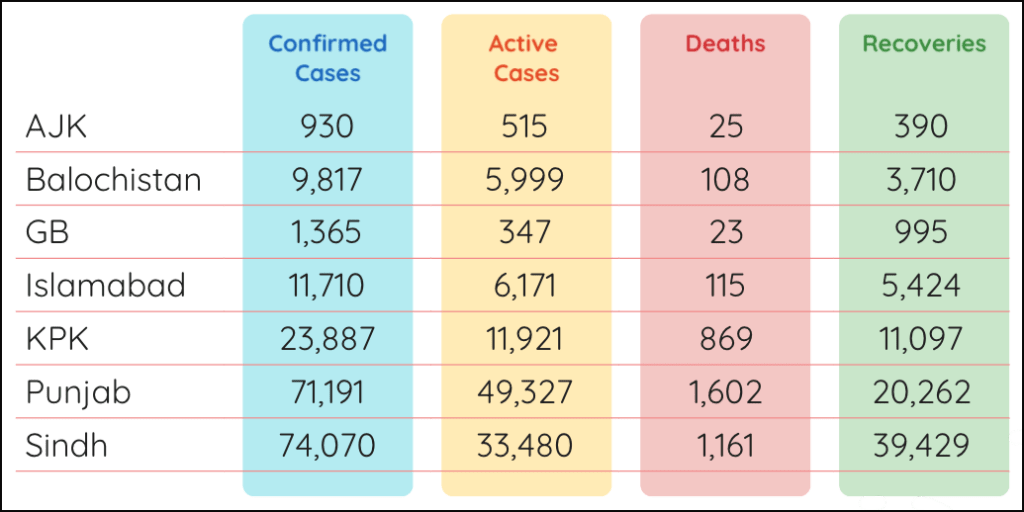 The provincial government has sealed 33 areas under the federal government’s “smart lockdown” for a week in a bid to stem the spread of the novel coronavirus. Health Minister Dr. Yasmin Rashid on Wednesday told a press conference that the areas already sealed had started to report fewer new infections, but warned that the effectiveness of the “smart lockdown” strategy could only be properly gauged after two weeks had passed.

Provincial health minister Dr. Azra Pechuho on Wednesday warned at the Sindh Assembly that second and third waves of the coronavirus were “inevitable,” adding that the center and other provinces were not taking the pandemic seriously. She also claimed that 178 people had become infected with COVID-19 at Ehsaas Emergency Cash Program centers, accusing the federal government of not enforcing standard operating procedures to stem the spread of the virus.

The provincial government on Wednesday decided to avail the newly constructed building for the Peshawar Institute of Cardiology to treat coronavirus patients during the pandemic. A meeting of the provincial task force on COVID-19 also decided to devise a strategy to contain the spread of the virus during the upcoming Eidul Azha. 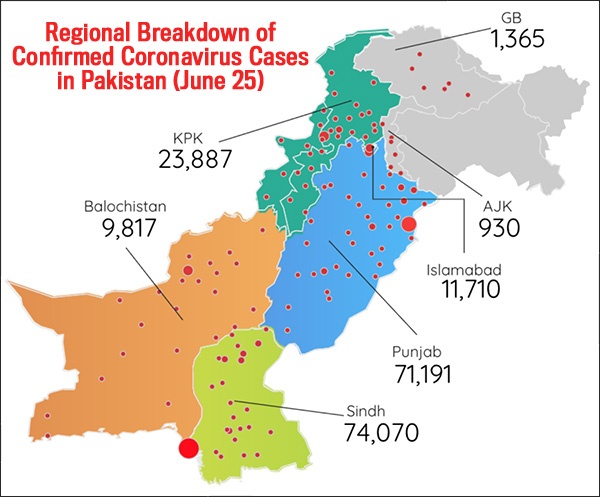 Just a day after the province boasted a steady decline in the number of confirmed COVID-19 cases due to the “smart lockdown,” new infections climbed to their highest level thus far this week, as the provincial government increased its testing from around 700/day to 948 on Wednesday.

Confirmed cases of the novel coronavirus in the province on Thursday rose by 183 to 9,817, with 2 new fatalities raising total death toll to 108. Overall, 3,710 patients have recovered from the virus, leaving 5,999 active cases of COVID-19.

Confirmed cases of the novel coronavirus in Gilgit-Baltistan rose by 28 on Thursday to 1,365. Overall, the region has thus far reported 23 deaths and 995 recoveries, leaving 347 active cases.

In Pakistan-administered Kashmir, confirmed cases have increased by 38 to 930. The region has thus far reported 25 deaths and 390 recoveries, leaving 515 active cases of the coronavirus.

Globally, the virus has now infected more than 9,532,035 people, with over 485,120 reported deaths. Governments across the world halted flights, locked down towns and cities and urged people to stay at home at the peak of the virus’s spread, but there are now signs of easements in nations that have reined it in to help shuttered economies recover. Overall, around 5,179,000 patients of the 9.5 million+ infected have recovered thus far.