Despite Leveling Off, CO2 Emissions Still Too High 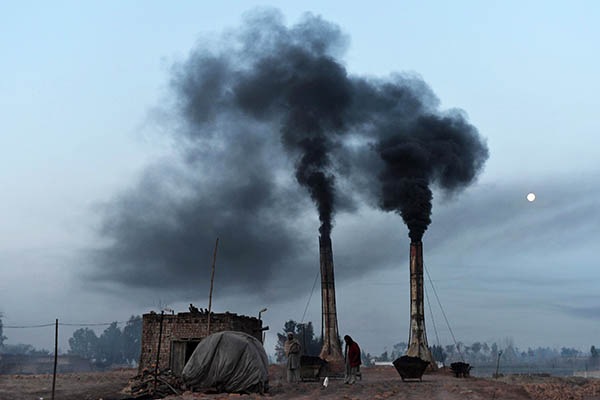 Report says lack of growth in emissions is helpful but not enough to reduce global warming.

Carbon emissions from burning fossil fuels have been nearly flat for three years in a row—a “great help” but not enough to stave off dangerous global warming, a report said on Monday.

Emissions of planet-warming carbon dioxide stayed level in 2015 at 36.3 billion tons (GtCO2) and were projected to rise “only slightly,” by 0.2 percent in 2016, according to the annual Global Carbon Budget report compiled by teams of scientists from around the world.

“This third year of almost no growth in emissions is unprecedented at a time of strong economic growth,” said research leader Corinne Le Quere of the University of East Anglia. Driven largely by reduced coal use in China, this was a “clear and unprecedented break” with the preceding decade’s fast emissions growth, at a rate of some 2.3 percent per year from 2004 to 2013, before dipping to 0.7 percent in 2014. “This is a great help for tackling climate change but it is not enough,” said Le Quere.

For the world’s nations to make true on the global pact to limit average global warming to two degrees Celsius over pre-Industrial Revolution levels, emissions must do more than level off, the study found. A decrease of 0.9 percent per year was needed to 2030.

The concentration of greenhouse gases in the atmosphere has continued to grow, the report warned, hitting a record level of 23 GtCO2 last year that looked set to reach 25 GtCO2 in 2016.

The analysis was published in the journal Earth System Science Data, to coincide with the U.N. climate conference in Morocco.

Climate envoys are gathered in Marrakesh to put plans in place to execute the so-called Paris Agreement concluded in the French capital a year ago. It envisions a dramatic reduction in greenhouse gas-producing coal, oil and gas use for energy.

The new report said humanity has emitted 2,075 GtCO2 since 1870—adding 40 GtCO2 in 2016 alone. “We have already used more than two thirds of the emissions quota to keep climate change well below two degrees,” it warned. “The remaining quota would be used up in less than 30 years at the current emissions level.”

Under the so-called Paris Agreement’s predecessor the Kyoto Protocol, rich nations had to meet emissions reduction targets. Developing countries were excused as they needed coal and oil to fuel rapidly growing populations and economies. China, despite not having any Kyoto targets, has been fast moving away from coal—driven in large part by major air pollution concerns.

After growth of 5.3 percent per year from 2005-2014, China recorded a decline of 0.7 percent in 2015 and is set for a 0.5 percent drop in 2016. This decline in the world’s most populous nation and biggest greenhouse gas polluter “largely accounts” for the global trend, the report said.

The world’s number two emitter, the United States, decreased emissions by 2.6 percent in 2015, with a fall of 1.7 percent projected for 2017.

The election of Donald Trump, who has threatened to “cancel” the Paris pact, has cast a long shadow over the Marrakesh talks, where many fear the U.S. will abandon its targets to the detriment of the global goals.