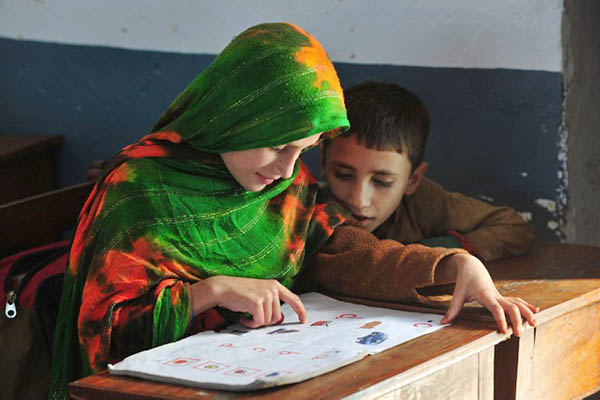 Eminent nuclear scientist and educationist Dr. Pervez Hoodbhoy has noted that Pakistan’s Punjab province has finally crossed the Rubicon of cleaning up the toxic lessons our children are force fed in schools. Examining a pile of textbooks detoxed under “Punjab Chief Minister’s Program for Education Reforms,” he has found:

– Instead of beating the tired, old drum of Muslim scientists from a thousand years ago, there is now a genuine attempt to teach actual science—how plants grow and breathe, objects move, water makes droplets or freezes, etc.

– Pakistan’s date of birth has thankfully been set at 1947 and not at 712—the year Arab imperial conqueror Mohammed bin Qasim set foot in Sindh.

– A history book frankly admits that Muslims had fought against other Muslims and ascribes the Mughal Empire’s downfall after Emperor Aurangzeb to his quarrelling sons rather than the eternally scheming Hindu Rajputs.

– The most revolutionary addition in a Pakistan Social Studies textbook is an Urdu translation of Quaid-e-Azam’s famous speech of Aug. 11, 1947, which notes that religion is a matter for the individual citizen, and not of the state.

Hoodbhoy would have liked a more thorough revamp but remains grateful, perhaps realizing that Chief Minister Shahbaz Sharif might still get into trouble with the above “improvements.” For instance, he still criticizes the following:

– The reasons for East Pakistan seeking separation from West Pakistan remain unexplained; and there is a continued blackout of Operation Gibraltar—the Kargil-like venture of Gen. Ayub Khan to liberate Kashmir that precipitated the 1965 war

When nations go to war, they usually plead disputes relating to boundaries, but the real cause of war is always in the mind, and the mind is prepared, over time, through a “grand narrative” buried in textbooks. National wars can’t be executed without a uniform national mind and national mind can’t be created without first artificially creating a national psyche. This job is done through textbooks made to serve as cruel injections of falsehood into the nation’s children. Education can enrich nations economically through skills, but with the wrong lessons it can also poison and restrict their growth.

By handing the reigns to our religion’s champions, who claim themselves as ‘saviours’ of Islam, we have relinquished the vision of Quaid’s that “…religion is a matter for the individual citizen, and not of the state.” Now it’s become everybody’s business!