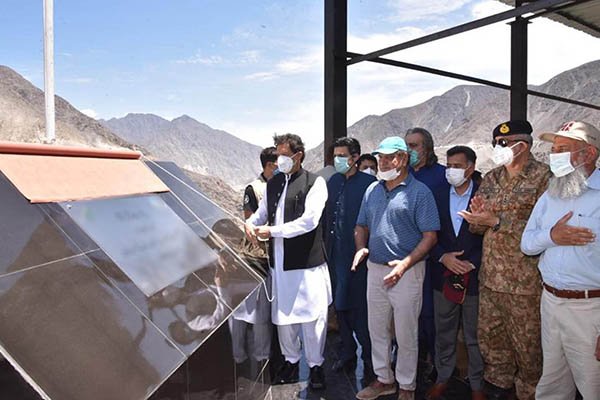 In speech at Chilas, prime minister says hydroelectric power is environmentally friendly and less costly than oil or coal-powered plants

Inaugurating the construction work on the long-pending Diamer-Bhasha Dam on Wednesday, Prime Minister Imran Khan said it would be the “biggest dam in Pakistan’s history,” and slammed past governments for not initiating more “environmentally friendly” hydroelectric power generation projects.

Addressing a ceremony in Chilas after visiting the site of the dam with Chief of Army Staff Gen. Qamar Javed Bajwa and Water Resources Minister Faisal Vawda, Khan said that the Diamer-Bhasha Dam would be the country’s “third big dam.”

Comparing Pakistan to China—despite claiming in the past the two could not be adequately likened—the prime minister said Beijing had around 5,000 “big dams” and around 80,000 dams in total. “From this you can gauge the massive mistakes we have made in the past,” he said, once again hitting out at previous governments despite having now been in power for almost two years.

“The decision to build this dam was taken 50 years ago… it is a natural dam,” he said, claiming that the delay in initiating construction was one of the “biggest reasons why we haven’t progressed.” Vowing that the incumbent government would go for more dams, the prime minister claimed this would reduce burden on foreign exchange as less furnace oil would be required, and would also allow Pakistan to become an independent power producer.

Khan stressed that nations could only progress if they thought about the future and invested their resources for the uplift of downtrodden segments of society. “The decisions made in the ‘90s to generate electricity using imported furnace oil affected our current account deficit,” he said, claiming this had resulted in an economic crisis. “The value of the rupee started falling after deciding to generate electricity from imported oil; when the rupee depreciates, all imports become more expensive and inflation rises. This affects the poor people,” he said.

The prime minister said hydroelectric power would also result in less pollution and global warming than electricity generated using furnace oil or coal. He said the project would generate job opportunities for the people of the region.

According to Khan, the project would prove a great boon for the people of Chilas and the wider Gilgit-Baltistan. “It is our government’s policy to prioritize areas that have been left behind,” he said, adding that the Pakistan Tehreek-e-Insaf was investing in Gilgit-Baltistan, the former FATA areas and Balochistan.

The prime minister also reiterated his desire to have tourism restored in the region amidst the coronavirus pandemic. “I am well aware how much the area depends on tourism and how much they need tourism during the summer months,” he said, adding he would urge the chief minister to resume tourism with standard operating procedures to curb the spread of the virus.

“We can learn from the world, tourism is slowly resuming. It won’t be the same as it was before the pandemic hit, but we can start opening it slowly and start developing SOPs for it,” he said.

Earlier, in a posting on Twitter, Special Assistant to the P.M. on Information—and China-Pakistan Economic Corridor Authority chairman—Asim Bajwa said the project would generate 4,500MW of hydroelectric power, have a 6.4 million acre-feet storage reservoir, and provide 16,000 jobs.