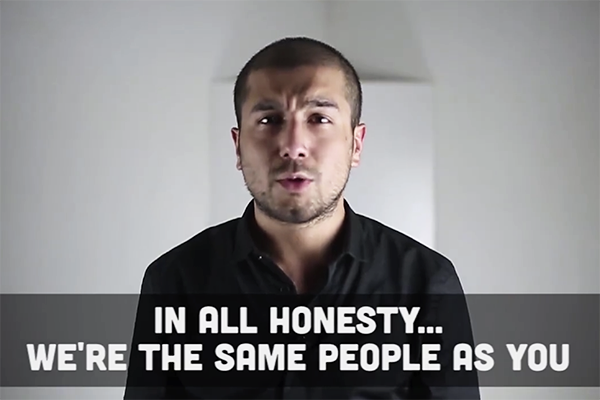 Pakistani Muzamil Hasan Zaidi says it is great to see people’s views being changed by the video.

The director of a video response to the Paris attacks that has received millions of views is “humbled” by the response, he told AFP.

To Paris from Pakistan features five young Pakistani comedians vowing solidarity with France and refusing as Muslims to apologize for the actions of “a few deranged individuals who somehow claim to be like us.” It had been viewed more than 3.5 million times on Facebook by Friday morning.

“It is absolutely humbling to get messages from people in Europe who tell us that their views changed after watching the video since they had never been introduced to a Muslim or Pakistani before,” Syed Muzamil Hasan Zaidi, the 25-year-old director of the LolzStudios Team video, told AFP late Thursday. “We really feel great about getting our message across so many people in the world.”

Zaidi said the video was the work of 10 digital artist friends who studied computer science together. They have made videos about other things they feel strongly about: including the Peshawar school massacre, Pakistan’s deadliest ever extremist attack; the 2013 parliamentary elections, and a video they made in 2012 called “22 random acts of kindness”, which has been viewed on YouTube more than 400,000 times.

The comedians cite the Peshawar attack, in which Taliban gunmen coldly slaughtered more than 150 people, including 125 children, at an Army-run school in December last year, in the video. “We actually are one of the few nations who completely understand what you guys are going through,” they say, noting statistics that show Muslims are the biggest victims of terrorism worldwide. The group also said it was “easy” to blame Muslim refugees coming to Europe: “But you have to understand that they are running away from the same people who are carrying out these attacks.”

And they finished by saying: “We’re the same people as you… When we go to bed at night we fall asleep, hoping and praying to wake up to a better world, for all of us.”

To Paris, From Pakistan
Please share it as much as you can so it reaches the people in Europe!
#PrayForParis #PrayForTheWorld