Disaster for Brazil as Germany Triumphs 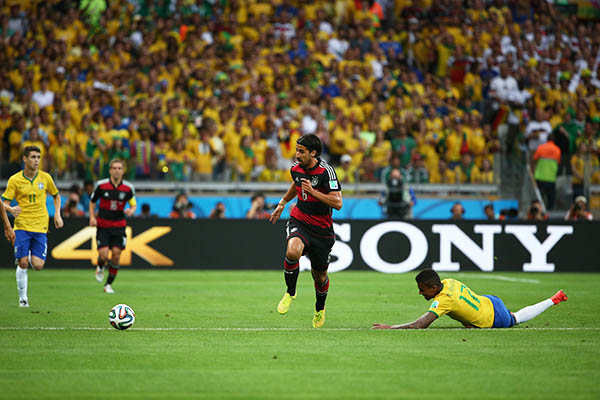 Germany will now face Argentina or the Netherlands in World Cup 2014 final on July 13.

Brazil’s World Cup dream was smashed into oblivion on Tuesday as Germany ran riot to win an extraordinary semifinal 7-1, sending the hosts crashing to the worst defeat in their 100-year footballing history.

Sixty-four years after Brazil was plunged into national mourning after their loss in the 1950 final, the hosts were torn apart in a defeat likely to be every bit as traumatic as the fabled “Maracanazo.”

Tearful Brazil captain David Luiz immediately apologized to the South American nation after a rout that was swiftly christened “The Shame of Shames” by the football-mad nation’s media. “Apologies to everybody, apologies to all the Brazilian people,” sobbed Luiz.

Brazil coach Luiz Felipe Scolari echoed the mood of despair. “We ask for forgiveness,” Scolari said. “To the people, please excuse us for this negative mistake.”

Brazil’s President Dilma Rousseff added to the gloom. “Like every Brazilian, I am very, very sad about this defeat. I am immensely sorry for all of us. Fans and our players,” she wrote on Twitter, where many Brazilians vented their anger via the hashtag #vergonhabrasil (humiliation Brazil).

Germany star Thomas Mueller, who scored his fifth goal of the tournament in the thrashing, admitted he was stunned by the scale of the victory. “I don’t know what to say to be honest,” Mueller said. “I can’t believe it. It’s something totally crazy. It just went well today,” added Mueller, whose team will now face either Argentina or the Netherlands in Sunday’s final at the Maracana.

Germany’s passage to Rio was booked after a first-half blitz, which included a burst of four goals in six devastating minutes. Mueller opened the scoring on 11 minutes, punishing poor Brazilian marking at a corner to make it 1-0. Brazil, badly missing suspended captain Thiago Silva, tried to regroup but there was no respite.

Miroslav Klose’s cool finish on 23 minutes, which made him the World Cup’s all-time top-scorer with 16 goals, was the cue for the floodgates to open. Toni Kroos struck twice in the 24th and 26th minutes to make it 4-0 and then Sami Khedira rounded off another clinical move to make it 5-0 on 29 minutes.

Dead and buried inside half an hour, the crowd at the Mineirao Stadium was stunned into silence. Many fans burst into tears as they struggled to comprehend the enormity of what had befallen their beloved ‘Selecao.’ After the fifth goal hundreds of people left their expensive seats.

A section of the crowd chanted sexually-expletive obscenities against the team and Brazil’s leader Rousseff, who up to now had enjoyed a reprieve from protests over the record $11 billion spent to host the tournament. Across the nation, other fans shouted at their televisions and abandoned public screenings.

Though Brazil rallied at the start of the second half, the torture continued on 69 minutes when Andre Schuerrle swept in Germany’s sixth. This time boos rang out around the Mineirao as the Germans celebrated.

Schuerrle then grabbed his second on 79 minutes to make it 7-0, and confirm the worst defeat in Brazil’s history. The previous record loss had been a 6-0 reverse to Uruguay in 1920.

Schuerrle’s second goal was greeted by a burst of applause as Brazilian fans saluted Germany’s wonderful exhibition of attacking football. A late goal from Oscar was barely applauded by Brazil’s fans.

Brazil had gone into the match riding a fervent wave of national emotion, determined to clinch a place in the final to honor injured striker Neymar. The crowd roared chants of “Neymar, Neymar” just before kick-off, following a spine-tingling rendition of the national anthem that saw captain David Luiz proudly holding up the injured striker’s No.10 shirt.

But Mueller’s early strike punctured the fervent mood. And when the goals started flying in after Klose made it 2-0 there was no way back for Brazil.

The result was greeted with disbelief by fans across Brazil. The sports daily Lance called Tuesday’s crushing loss “The Biggest Shame in History.”

Alexa Rosatti, 19, a university student watching the game at a popular Sao Paulo bar district said she had feared Brazil would lose. “But I never thought it would be a massacre,” she said. “I stopped watching for a second and they already had scored a sixth goal.”

In Rio, at a street screening that had attracted 30,000 people, Karina Marques, a 17-year-old footballer, predicted a violent reaction from angry fans. “It’s a disaster. It will be chaos,” she said. “People will break everything. They’re going to be furious. The government spent a lot of money for this World Cup instead of investing in health and education.”

the loss by Brazil by such a big margin is difficult to believe.Ihope it is monetarily compensated after spending 11M $ on 12 beautiful stadia in the country.