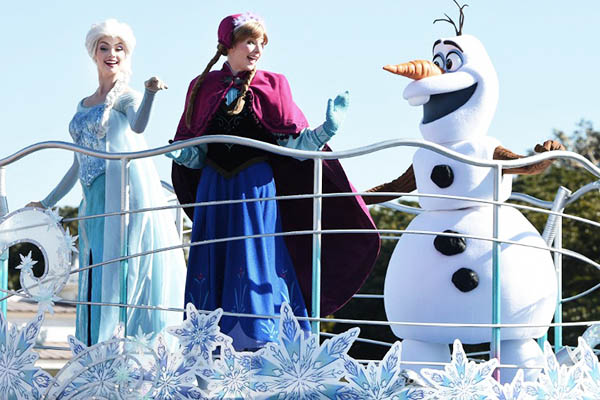 An animated short featuring the characters of the blockbuster movie will precede the official sequel.

Do you wanna build a sequel? For Disney, the answer is an obvious yes.

Disney Animation announced Thursday that a follow-up to the animated mega-hit Frozen—which raked in nearly $1.3 billion in global ticket sales—is in the works.

“Forecast: Winter weather ahead! Disney Animation developing #Frozen2,” the studio said on Twitter, adding that directors Chris Buck and Jennifer Lee would be back for the second installment of the musical tale. “At last, I can say – FROZEN 2!!!! I’m beyond excited to create alongside my Frozen family!” Lee tweeted, along with a photo of Queen Elsa and her sister Anna—the stars of the blockbuster Oscar-winning flick.

Beyond being Disney’s top box-office hit, Frozen is the fifth top-grossing film of all time, according to industry tracker Box Office Mojo. It won two Oscars last year for best animated feature—Disney’s first in the category—and best original song for the ubiquitous “Let It Go.”

Beyond the booming ticket sales, the film’s princess stars and adorable sidekick Olaf the Snowman are also cash generators in the form of merchandise, theme park attractions and, appropriately, ice shows.

The film’s soundtrack—boosted by the popularity of “Let It Go” and other tunes like “Do You Wanna Build A Snowman?”—has been a bestseller. There are tentative plans for a Broadway show, following in the footsteps of The Lion King and Aladdin.

Loosely based on Hans Christian Andersen’s The Snow Queen, the film tells the story of princess Anna, who sets off on a journey to find her sister Elsa, whose hard-to-control icy powers have trapped the kingdom of Arendelle in eternal winter. The dynamic sisters are set to star in an animated short, Frozen Fever, to be released with Disney’s live-action feature Cinderella on Friday—a twin bill that experts say is likely to boost Cinderella sales.

Frozen 2 quickly became one of the top trending topics on Twitter. Actress Kristen Bell, who portrays Anna, tweeted a photo of herself smiling and sleeping on a bag of ice cubes, with the message: “Dreams really do come 2!!! #FROZEN2.”

The announcement from Disney—also made at an annual meeting with shareholders—is hardly a surprise, given the massive success of the 2013 original, which focused more on sisterly love than a romance. The studio’s last animated release, Big Hero 6, has so far taken in just $604 million worldwide in comparison, despite largely positive reviews and this year’s Oscar for best animated feature.

Disney also offered news on another major franchise—the Star Wars films. It revealed the title of its first stand-alone film featuring Star Wars characters—Rogue One—and said Oscar-nominated British actress Felicity Jones had been cast in the flick set for release in December 2016. Episode VIII in the original series will be released in May 2017.

“We’ve had four straight years of record results,” Iger told shareholders. “Driven by extraordinary creativity, innovative technology and global expansion, 2014 was in fact the best year in our history.”

Revenue was up eight percent to $48.8 billion, a company statement said. Disney shares were up 3.5 percent to $106.55 in late trade—a sign that investors were pleased with the announcements.