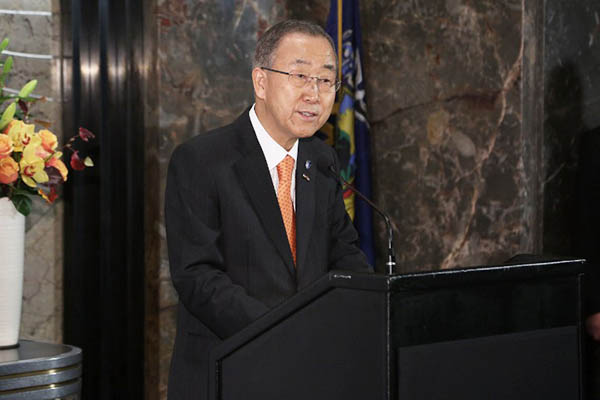 Ban said in an opinion piece published in The New York Times that Israel cannot keep “lashing out at every well-intentioned critic” of its policies and that he had “pointed out a simple truth.”

“Palestinians—especially young people—are losing hope over what seems a harsh, humiliating and endless occupation,” he said in the editorial posted on the website late Sunday. At the same time, Israelis are reeling from near-daily attacks and “losing sight” of the possibility of a peace deal, he said.

“The time has come for Israelis, Palestinians and the international community to read the writing on the wall: the status quo is untenable,” he wrote.

The op-ed was the latest salvo from the U.N. chief on the Israeli-Palestinian peace process, which has been deadlocked since a U.S. peace mission collapsed in April 2014. U.N. diplomats said privately that Ban was turning up the pressure to try to get peace talks moving again before he steps down as secretary-general at the end of the year.

Israeli Prime Minister Benjamin Netanyahu last week accused Ban of “encouraging terrorism” after the U.N. chief said it was understandable that the Palestinians were resisting Israeli military rule. Ban said he was “concerned that we are reaching a point of no return for the two-state solution” and “disturbed” that senior Israeli government members are saying that the aim should be abandoned altogether.

The U.N. chief urged Israel to make “significant shifts in policies toward the West Bank and Gaza” to support the Palestinian Authority with housing, water, energy, communications, agriculture and access to natural resources.

The Palestinians, for their part, must bring Hamas-controlled Gaza and the West Bank under a “single, democratic governing authority” and stop the construction of tunnels in Gaza used to wage attacks against Israelis.

Israel seized the West Bank and east Jerusalem in the 1967 Six-Day War. It later annexed east Jerusalem in a move never recognized by the international community. Israel occupied Gaza in the 1967 war and pulled its troops and settlers out in 2005, but it still exercises control over most of Gaza’s borders, waters and airspace.