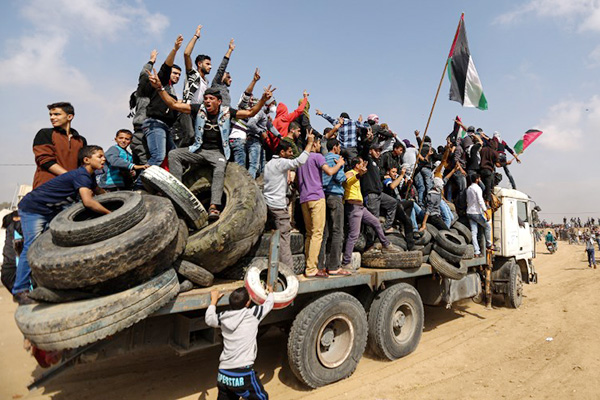 Thaer Sharkawi, 31, has never visited the place he calls home. The Palestinian was born and raised in the Amari refugee camp in the occupied West Bank, but for him his house is 50 kilometers away in the town of Kafr Ana inside what is now Israel.

Kafr Ana hasn’t actually existed for decades—demolished in the weeks after Sharkawi’s grandfather fled in 1948—yet he knows there was a boys’ and girls’ school and can vividly picture the orange groves his great-grandfather tended.

“I haven’t been there but I have heard about it,” he told AFP. “I studied about it and read about it on the internet.”

Sharkawi is one of around five million Palestinian refugees spread across Lebanon, Jordan, Syria, Gaza and the West Bank. The majority of them are descendants of those who left during the 1948 “Nakba”—or catastrophe—when more than 700,000 were expelled or fled their homes in the war surrounding Israel’s creation. Like Sharkawi, most have never seen their historic homes, many of which were destroyed by Israel.

Yet, as they mark seven decades since that mass displacement on May 15, Palestinian refugees are determined to maintain connections to the land they still want to return to.

Sharkawi sits with his father Nabil and grandmother Khadija, who at 85 remembers fleeing her home as Israeli fighters approached.

Nabil contrasts the open fields of his father’s former home to the cramped conditions they have lived in for 70 years in the Amari camp, but said he wasn’t worried the new generation would lose the link to their historical homelands. “There are [technological] developments now—there is Sheikh Google. They can open it and see ‘here was Kufr Ana’,” he said. “Google helps them to see the land that is theirs.”

But Ali, a 19-year-old also in Amari but whose grandparents came from Al-Na’ani, said he knew “nothing” about the village, also destroyed in 1948. “My grandparents died when I was young and no one really talked about it.”

The so-called right of return for Palestinian refugees is one of the most difficult issues in the Israel-Palestinian conflict. Israel flat out rejects it, saying allowing even a fraction of them to return would mean the end of it as a Jewish state.

But Palestinians see the issue as essential and refugees have passed on memories from generation to generation. They will rarely say they simply come from Palestine, instead naming a village, town or even street.

In a field, Bakar Fahmawi points his camera at an abandoned Ottoman building, with rows of neat Israeli houses in the background. “Here there was a market for all kinds of trade,” he says on the video, pointing his phone at an overgrown field.

Every week for the past five years Fahmawi, an Israeli citizen whose Palestinian family remained inside the land that became Israel, has filmed an abandoned village or area and posted it on his Facebook page for Palestinians across the world to see. “Those that left have heard about their country, but they have never seen it,” he told AFP by phone. “I do it so they don’t forget their country and for them to know they have a country, the most beautiful in the world.”

In Gaza, run by Islamist movement Hamas and hermetically sealed by Israel and Egypt for years, the internet is often the only way for them to see the outside world. Since protests and clashes calling for the right to return began on March 30 along Gaza’s border, more than 50 Palestinians have been killed by Israeli fire, mostly by snipers. No Israelis have been injured.

Israel accuses Hamas, with whom it has fought three wars in a decade, of using the protests as cover for violence, but Palestinians say protesters are being shot while posing no threat.

The Nakba commemoration is likely to bring fresh bloodshed in Gaza, especially if Hamas encourages protesters to approach the border fence and with Israel determined to stop infiltrations.

Shayma Abeed, 16, has known nothing but Gaza, yet she holds up the key to her grandfather’s house in al-Jiyya, a town 19 kilometers north of the Palestinian enclave and which was emptied in 1948. “[Grandad] used to love to tell us about al-Jiyya, his friends, the farm work and our house that was warm in the winter and cool in summer,” she said. “We will return to his house one day.”