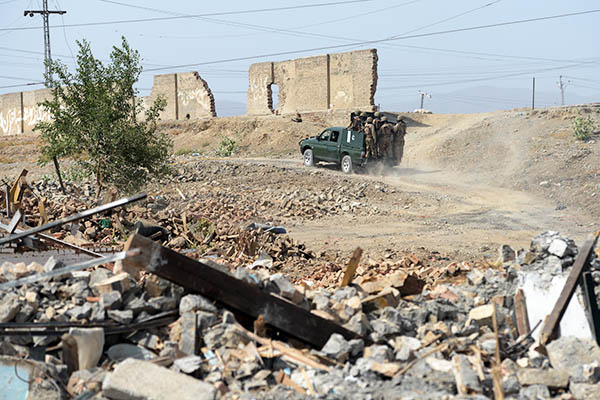 A U.S. drone strike on Thursday killed six suspected militants in North Waziristan, the tribal district where Pakistan has launched a major military offensive against local and foreign fighters.

Pakistan’s armed forces have been waging a massive assault on the tribal area in recent weeks to eradicate hideouts militants have used to launch attacks across the restive country. The Army says it is now in control of 80 percent of Miranshah, which officers said had become a virtual supermarket for jihadist fighters wanting to equip themselves with guns and explosives.

A local security official said that Thursday’s drone strike had killed four foreign fighters and two local cadres who had fled Miranshah before the launch of the offensive. “The compound and a vehicle parked inside were completely destroyed and killed at least six militants,” said the official.

Doga Macha Madda lies in difficult, mountainous terrain, which the official said the militants had hoped to use as cover. Another security official in Peshawar confirmed the attack and the casualties.

It is the third round of drone strikes to hit northwest Pakistan since the U.S. resumed the campaign following a six-month hiatus. Washington reportedly suspended its drone program in December to give Islamabad time to pursue a dialogue process with the Tehreek-e-Taliban Pakistan (TTP) to end a seven-year insurgency that has claimed thousands of lives.

But a spectacular, bloody attack on Karachi airport on June 9 that left dozens dead sank the peace efforts and prompted the army offensive. U.S. drone strikes resumed a few days after the Karachi attack, though Pakistani officials insist they have not given their approval.

Drone strikes have helped Pakistan in eliminating high targeted militants. The hiatus was noticeable, but the talks were not going any where. Since the army offensive has been launched, many militants have been killed by the air strikes. The ground offensive has begun too. Now the TTP terrorists have no place to hide. They have been encircled by the army.

We appreciate the drone strikes killing several militants We can not give them the time to regroup and counter attack. Their days are numbered. This time the army operation has been launched to eliminate all the insurgents. We have already paid a heavy price of their attacks.

We must eliminate all of them.