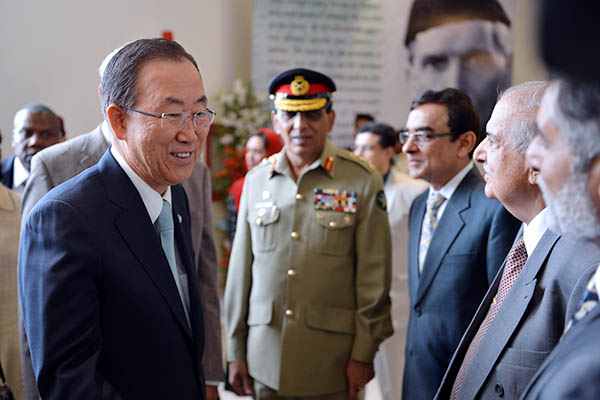 U.N. chief Ban Ki-moon waded into the controversy surrounding U.S. drone strikes during a visit to Pakistan on Tuesday, insisting they must operate within international law.

The CIA has carried out hundreds of missile strikes on suspected militants in northwest Pakistan since 2004 and the campaign is a major thorn in relations with the U.S. Washington views the strikes as an important tool in the fight against Al Qaeda and Taliban militants, but Islamabad condemns them as a violation of sovereignty and international law.

Ban addressed the controversial weapons in a speech at the National University of Science and Technology in Islamabad, where he inaugurated a new building.

“As I have often and consistently said, the use of armed drones like any other weapon should be subject to longstanding international law, including international humanitarian law,” he said to applause from an audience mostly made up of soldiers. “This is a very clear position of the United Nations. Every effort should be made to avoid mistakes and civilian casualties.”

The United States insists the drone strikes are legal and in May President Barack Obama laid out strict guidelines for their use.

Britain’s Bureau of Investigative Journalism says the U.S. has carried out nearly 400 drone strikes in Pakistan since 2004, killing up to 3,500 people, including hundreds of civilians.

Ban arrived in Islamabad for a two-day visit amid high tensions between Pakistan and India over the disputed territory of Kashmir.

He will meet President Asif Ali Zardari and Prime Minister Nawaz Sharif for talks as Pakistan and India trade accusations over clashes along the Line of Control, the de facto border monitored by U.N. observers that divides the disputed Himalayan territory.

Islamabad on Monday summoned India’s deputy ambassador to protest against what it called “unprovoked shelling” which killed one civilian. India’s army, meanwhile, accused Pakistan on Tuesday of firing across the border into Indian-administered Kashmir overnight, but did not report any casualties. Sharif attempted to lower the temperature in remarks published Tuesday, calling for a “new beginning” in relations with India.

Despite the Kashmir tensions, the U.N. said Ban’s visit would focus on education efforts and he is due to meet students later on Tuesday. “In line with Malala Day last month he will meet with students in Islamabad to discuss efforts to promote and expand quality education for all,” a U.N. statement said.

The day was declared in honor of Malala Yousafzai, a Pakistani teenager campaigning for girls’ education who survived a gunshot to the head from Taliban extremists in October 2012. The 16-year-old gave a moving speech at the U.N. in New York last month in which she vowed to continue to work for gender equality in education.

Nearly half of all children in Pakistan and almost three quarters of young girls are not enrolled in primary school, according to U.N. and government statistics.

During Ban’s visit officials of Pakistan’s National Disaster Management Authority will brief him about the floods in the country, where annual monsoon rains from July to September bring misery to thousands and inundate towns and villages.

Monsoon rains triggering floods have killed 84 people across Pakistan and affected more than 80,000 others this month, and officials have warned of further downpours.

Better late than never. The UN doing it now, after so many years, will still be a welcome move as it is the only international organization mandated to do so. But do you think it can bell the US cat? Lets hope it does because without that the world will be a very dangerous place!

UN is a dummy organization, They cant do anything real unless its in the interest of US and Europeans.