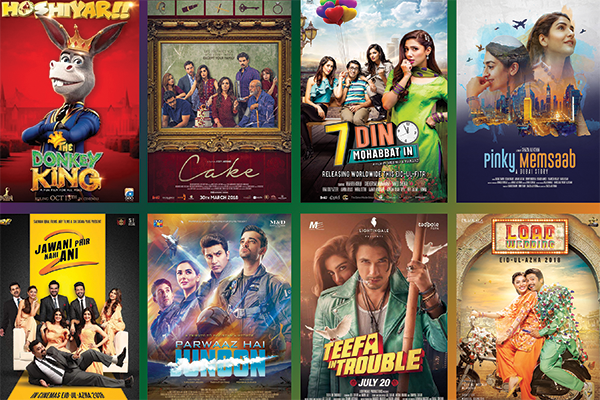 It is a teaser that teased to the hilt, fittingly ending a milestone year in Pakistani cinema’s second coming where the output from the industry was almost double that of previous years with over 20 films making it to cinemas. The Legend of Maula Jutt looks to weave a tale of mythological proportions in 2019, squeezing out some of the local Jutt from an iconic Punjabi confrontation in favor of a Spartacus like Greco-Roman panorama. “Bilal Lashari has created an amazing cinematic world,” says director Saqib Malik admiringly, whose debut film Baji (scheduled for release in 2019 with old school it-girl Meera leading the ensemble cast) is also inspired by the golden years of Lollywood, paying homage to the Shamim Ara-Nayyar Sultana social drama from 1963, at least in name.

And then there is Asim Reza’s Paray Hut Love, which brings respected writer Imran Aslam and his famous one-liners to Pakistani films. And master craftsman Ehteshamuddin (Aangan, Udaari) directing Mahira Khan and Bilal Ashraf in Hum Films’ Superstar (no secret!). Coupled with filmmakers Nadeem Baig (JPNA 2) and Nabeel Qureshi developing new projects for the big screen it would seem that in terms of theme, subject and style, and even platform, the last year of the ’10s is going to test the audience’s taste and their wallet.

But the directors hoping to claim the cinema-going public’s attention in 2019 have a tough act to follow. The year 2018 has been record breaking for the Pakistani film industry. It saw film output double and box-office returns reach a new high. Exact figures are difficult to determine but it is clear that the gross combined earnings of the films released in a single year crossed Rs. 2 billion, which is a first for Pakistani cinema. According to film website BoxOfficeDetail.com, five films passed the Rs. 100 million mark and three (Jawani Phir Nahin Ani 2, Parwaz Hae Junoon and Teefa in Trouble) did better than Rs. 300 million. This was a refreshing return to form after a few potential big guns like the Bilal Ashraf-Urwa Hocane musical Rangreza and Shaan Shahid’s Arth 2: The Destination badly misfired toward the end of 2017.

This past year, however, started well with Parchi, produced by the Janaan (2016) team from Islamabad. Starring Hareem Farooq and Ali Rehman it was an entertaining crime caper whose item number “Billo hai” was heard playing at every mehndi in January. It would seem that the return of Indian films to Pakistani cinemas in late 2017 helped re-establish a broken cinema-going habit which cannot subsist on a dozen or two dozen Pakistani releases a year. Yet in October 2018, the Pakistan Film Producers Association—comprising mainly Lollywood producers who have not made films for several years—thought it fit to demand a complete ban on Indian films from the new PTI government. Had it gone through, the ban would have ironically debilitated the functioning Pakistani film industry and led to a closing down of cinemas which suffered huge losses during the self-imposed 2017 suspension.

So apart from raking in the rupees, what else has Pakistani cinema achieved in the past year? For one, it has shown its range through smaller films like Motorcycle Girl (based on the real life story of Pakistani biker Zenith Irfan) and Pinky Memsaab, both interestingly female-centric stories. Then there was Asim Abbasi’s début film Cake, a family drama focusing on two sisters with ageing parents which many proclaimed was a gamechanger in terms of storytelling, tone and framing. Cake seduced a serious cinema-going audience in the multiplexes, managing to garner about Rs. 700 million at the box-office.

Some like Vasay Chaudhry, writer of JPNA 2 claimed that the influential English language press in Pakistan tends to promote elite films like Cake while looking down on more mainstream or commercial films (actually his film got rave reviews from the same publications but oh well!). The fact remains that that the bigger film hits tend to be flashy, shiny a-laugh-a-minute rom-coms such as Nadeem Baig’s Jawani Phir Nahi Ani 2 (which had nearly half the industry in it and grossed more than any film in Pakistan including Bollywood releases) and Ahsan Rahim’s Teefa in Trouble (starring Ali Zafar and Maya Ali) which had an extremely catchy soundtrack to boot. But will the inability of female-centric films to pull in bigger crowds, and seem more niche, mean that fewer such films will light up the screen in 2019?

Actor and TV show host Fahad Mustafa, who also runs a massive production house churning out drama serials, said to me in an interview for the BBC that while our television audience for narrative formats is largely female, cinemas tend to be a male domain in Pakistan. This could possibly be because television is a free medium and women are the prime target audience while watching films in cinemas is an expensive activity and finances tend to be male controlled in our society. Basic cinemas are largely patronized by men and at Rs. 700 or more per ticket, the multiplex cinemas have shifted films from a common man’s past-time to an elite audience. Will male-led families dish out the dough for heroine-focused films? Certainly, while Hollywood successes have in the main been surprisingly female-led in the last few years according to recent reports, it seems unlikely that this will be the case in Pakistan any time soon. However, it would seem that female star power is able to make a difference in frothy entertainers like 7 Din Mohabbat In (starring Mahira Khan and Shehryar Munawar) which managed to garner around Rs. 100 million at the box-office despite a weak script and a forgettable soundtrack.

“People here tend to go to cinemas to watch brainless films,” says director Nabeel Qureishi, whose recent film Load Wedding, focusing on the ills of the dowry system didn’t really capture the audience last Eid despite many lighter moments. This further emphasizes the television drama/film dichotomy in Pakistan when it comes to audience motivation. While TV serials tend to glorify misery and depressing themes they contend resonate with middle-class women, audiences in Pakistan seem to flock to cinemas to escape the tedium and reality of everyday life. The song-and-dance routine is perfectly cast for this role and this is the format the big television companies like ARY films appear to favor. Qureishi who along with producer Fizza Meerza has been making successful independent films since Na Maloom Afraad in 2014 stresses the need for independent filmmakers to counter the bigwigs. “It’s very important for independent filmmakers to continue working independently as I believe the TV channels will eventually make the film business just like television, and then you will be seeing only certain kind of films which can make them money. It is very important that we tell different stories and experiment with the medium in Pakistan rather than just follow a certain formula prescribed by these financiers.” Of course certain formulas are still very much alive—but at least modified. This includes the patriotic action film Parwaaz Hae Junoon which put a female Air Force pilot (Hania Aamir) in the spotlight rather than the usual male muscle and brawn of earlier films like Yalghaar. Sherdil with Armeena Khan and Mikaal Zulfiqaar seems to be echoing similar themes.

Qureishi is correct of course in terms of aspiration, but clearly filmmaking while being a creative platform is essentially also a business. He admits that Load Wedding was badly distributed and the reason people didn’t see it is because it was competing for cinema space it wasn’t given. I also believe that while it was badly marketed, people also didn’t get the story or quite understand what the film was about from the cryptic title or the trailers. Which brings us to how significant targeted marketing has proved to be for filmmakers in 2018. Geo Films plugged its animated film Donkey King relentlessly on all its subsidiary channels, bringing back Lollywood hero Afzal Khan aka Jan Rambo in a new avatar to delight a new generation. It’s consequent success as the highest-ever grossing animated film in Pakistan has opened up a whole new space for the genre in Pakistan.

But even more intriguing is the potential of web-based platforms such as Netflix, which is slowly gaining popularity in Pakistan. A monthly Netflix subscription costs Rs. 1,500—or the equivalent of two cinema tickets in a Multiplex. As more people get online with internet-enabled televisions or via cheaper internet boxes that transform older sets, we could see this becoming a cost-effective platform for families wanting to watch Pakistani films slightly belatedly or to watch made-for-Netflix films that investigate new ways of storytelling and new themes. I’ve heard of a few Pakistani actors being offered work in Netflix productions but its too soon to say it anything will materialize. But this may be the best way to get talent from both India and Pakistan working together in 2019 to create some exciting fresh content.