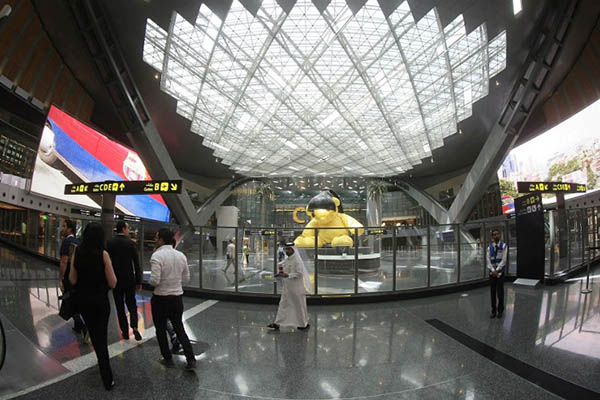 Qatar’s state-of-the-art Hamad International bills itself as one of the most luxurious airports in the world—but on Tuesday, it was also one of the quietest.

As a travel ban announced by Saudi Arabia, Bahrain, Egypt and the United Arab Emirates came into force, terminals and drop-off areas at Doha’s “gateway to the world” were deserted. “This is the emptiest airport I’ve ever been in,” said Katie, transiting Qatar en route to Thailand. “It’s exceptionally quiet, almost eerie.”

Hamad’s cavernous three-year-old terminals, constructed at an estimated cost of $16 billion, can seem relatively empty on normal days because of their massive size. But the diplomatic crisis between Doha and Riyadh backed by its Arab allies that has isolated Qatar left Hamad International a shadow of its normal activity on Tuesday.

With more than 30 Qatar Airways flights cancelled to and from Doha, there were neither traffic jams at departures where travelers are dropped off nor lines for taxis to pick up arriving passengers. Inside, a calm air of weary resignation took hold. Passengers gazed at information screens inside the terminals with amusement and pointed at cancelled flights to and from destinations across the Gulf, including Jeddah, Dammam and Dubai.

For most passengers, the experience was one of bemusement. “I have never seen it like this,” said a civil engineer, who was traveling home to New Delhi. “It’s crazy. I hope the crisis will finish soon.”

Downstairs in the arrivals hall, Jaffa, a taxi driver from the Philippines who picks up passengers every day, chuckled at the emptiness. “I’ve never seen so few people here,” he said.

Scenes were more frantic elsewhere in the Gulf as desperate Qatar Airways’ passengers scrambled to find alternative travel arrangements. Scenes of long queues on social media showed travelers at Qatar Airways offices across the Gulf, as Saudi Arabia announced it had revoked the carrier’s license and would close all its offices in the country within 48 hours.

Marsudi, an Indonesian trying to travel to Doha from Riyadh, told AFP he was holding a ticket, paid for by his employer, for a flight home to central Java via Saudi Arabia next Saturday. “They have to do something,” he said.

In the United Arab Emirates, the situation was just as bad for both those traveling on business and expats trying to fly home. “It’s appalling, basically,” said Farrukh Hafez, trying to find a flight home to Manchester. “I won’t be able to use my ticket, I can’t travel,” he said outside a Qatar Airways office in Abu Dhabi. “It has just absolutely disturbed all my summer plans and I don’t know if I’ll find any alternative flight to Manchester.”