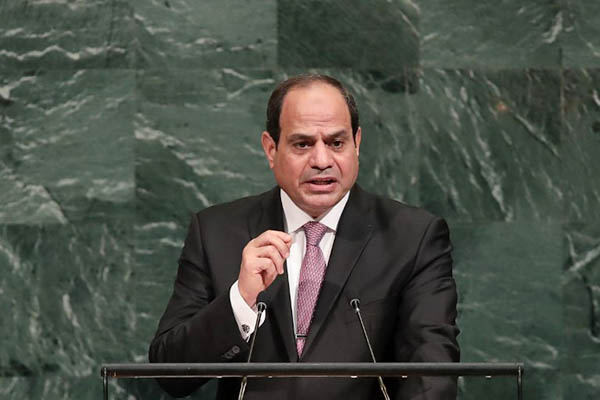 Egyptian President Abdel Fattah al-Sisi warned on Sunday against the dangers of protesting, in the wake of widespread demonstrations in Algeria and neighboring Sudan.

Sisi, who regularly evokes political stability to draw foreign investment, said protesters elsewhere were “ruining” their countries. The president fell short of naming the countries, although neighboring Sudan has since December seen regular demonstrations against longtime ruler Omar al-Bashir. In Algeria, tens of thousands of people have rallied in recent weeks against ailing President Abdelaziz Bouteflika’s bid for a fifth term in office.

“All this talk [of protests] comes at a price that people are required to pay,” Sisi said in a televised address to a military gathering.

Egypt’s president has overseen a crackdown on dissent, banning protests and jailing Islamists as well as liberal and secular activists. A former general, Sisi came to power following mass demonstrations against the rule of his Islamist predecessor Mohamed Morsi in 2013.

The president has repeatedly criticized the Arab Spring uprisings of 2011, which in Egypt ended the rule of autocrat Hosni Mubarak.

“How are tourism or factories or trade supposed to get off the ground? Should we eat or should we say that we were busy protesting?” he said on Sunday.

“Dozens were arrested for calling for the protests online after the crash,” said rights lawyer Gamal Eid on Sunday.

In January, Amnesty International said Egypt’s intensified crackdown on dissent has made the country “more dangerous” than ever for peaceful critics.

Running virtually unopposed, Sisi was re-elected in March 2018 for another four-year term with over 97 percent of the vote after all serious challengers were arrested or dropped out. Parliament stacked with Sisi’s supporters is looking into constitutional amendments to extend his tenure beyond 2022.