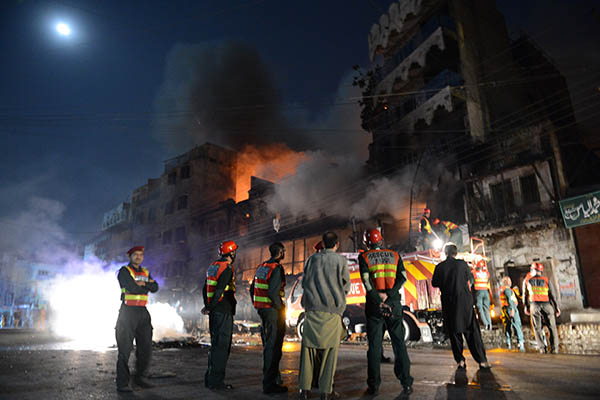 Riots erupted in Rawalpindi when procession of Shia Muslims coincided with sermon in Sunni mosque.

Sectarian clashes in Rawalpindi left eight people dead and over 40 injured on Friday as worshippers massed to mourn the seventh-century martyrdom of Hussain, the grandson of Islam’s Prophet, officials said. The clashes erupted when a procession of Shia Muslims in the main downtown area of Rawalpindi coincided with a sermon in a nearby Sunni mosque.

“The death toll from the clashes has reached eight people and 44 others are injured,” said Qasim Khan, a doctor at Rawalpindi’s district hospital. “Among 44 wounded people brought to our hospital, 13 had gunshot wounds,” he said, adding that five wounded were shifted to another hospital.

Police said private properties were also set on fire during the clashes. “The clashes started when a sermon was being delivered from a Sunni mosque which was on the procession route. The infuriated Shias attacked the mosque and also set fire to a cloth market,” Waseem Ahmed, a police official said. Another police official said shots rang out during the fighting and that the authorities were braced for further injuries. “According to latest reports, gunshots were also fired during the clashes. We fear there will be more casualties,” said Muhammad Yasir, an official at a police control room.

Media reports said large contingents of troops were deployed in the city following the clashes and forces used tear gas to disperse rival groups. An official of the rescue department said that the mosque and its attached seminary were also set alight. “There is still heat and fire inside the seminary attached to the mosque. We are unable to go inside because of the fire, we don’t know if there might be more people stranded inside,” said a rescue worker, without giving his name.