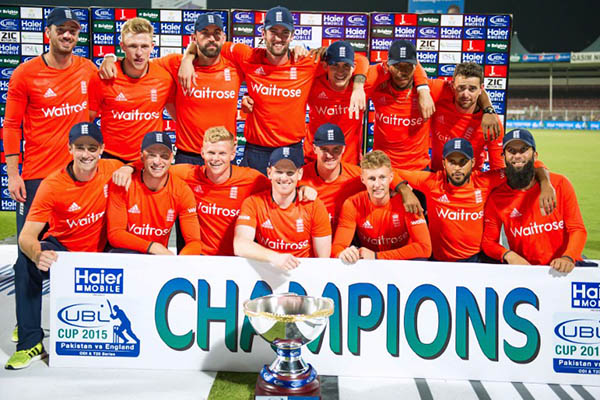 Victory boosts England to fourth in the T20 rankings, while Pakistan drops to sixth.

Paceman Chris Woakes starred for a second match in succession as he defended 10 runs in the last over to help England win the third and final Twenty20 in a Super Over finish in Sharjah on Monday.

Woakes conceded seven off the first two deliveries thanks to a six but managed to tie the game off the last ball as Pakistan faltered in the chase of a 155-run target. Pakistan then managed just three runs in the Super Over bowled by Chris Jordan, which England beat off just four balls for a 3-0 clean sweep of the series.

The victory lifted England to fourth in the Twenty20 rankings while Pakistan, second before the series, fell to sixth.

England won the first match by 14 runs and the second by three runs with Woakes defending 11 in the last over—both matches in Dubai.

Pakistan was unlucky not to win the match after Shoaib Malik smashed a career best 54-ball 75 for his fourth Twenty20 half century and added a quick-fire 63 off just 38 balls for the sixth wicket with Shahid Afridi, who made a 20-ball 29. Malik and Afridi joined company with Pakistan struggling at 65-5 as both took the attack to the English bowlers, much to the joy of a packed stadium.

Afridi smashed three sixes off his 20-ball innings before he was bowled by paceman David Willey, who finished with 3-36. Malik, whose previous best of 57 not out came against India at Bangalore in 2012, hit eight boundaries and two sixes but fell with just two needed for victory.

Pakistan were struggling at 11-3 after losing opener Ahmed Shehzad (four), Mohammad Hafeez to another run out for one and Raffatullah Mohmand (nought) by the third over. Mohammad Rizwan hit four boundaries in his 24 but he and Umar Akmal (four) fell in quick succession before Malik held the innings well.

England skipper Eoin Morgan was pleased at series win. “It’s a fantastic job,” said Morgan. “I don’t think we deserved to win today but it was a wonderful Super Over and the series win is very important for our progress.”

Pakistan skipper Afridi said his team needs huge improvement. “Credit to England, they played well and we played well as well as bad and there are lots of areas we have to improve and improve very fast,” said Afridi.

Earlier James Vince hit a career-best 46 and Woakes (37) lifted England—who won the toss and batted—from a precarious 86-6 during their fighting 60-run stand for the seventh wicket to take them to 154-8. Vince, promoted to open the innings after Alex Hales was rested, showed maturity by standing firm at one end as wickets fell at regular intervals. He hit three boundaries and a six during his resolute 45-ball knock.

Woakes smashed three sixes and a boundary off just 24 balls to give England some relief after leg-spinner Afridi (2-19) derailed England with two wickets in as many balls. Afridi dismissed Joe Root (32) and Moeen Ali first ball after debutant Aamer Yamin provided Pakistan the early breakthrough with the wicket of Jason Roy (nought) off the first ball of his career.

Yamin became the first Pakistan and 11th bowler overall to take a wicket with his first ball in Twenty20 cricket, but only bowled two overs, finishing with 1-12. Vince, dropped on 4 and 29, added 48 for the second wicket with Root.