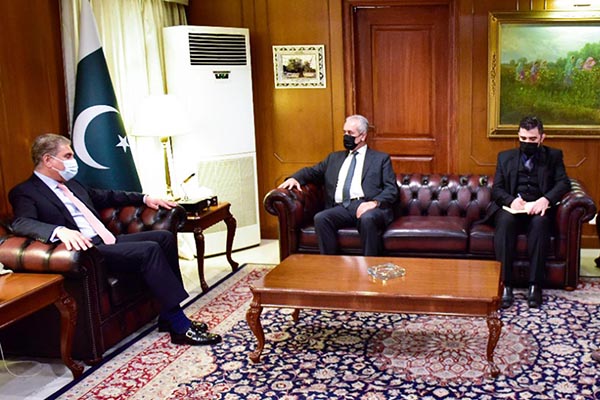 During a meeting with Foreign Minister Shah Mehmood Qureshi, he provided updates on the ground situation in Palestine. According to the Foreign Office, he stressed that the situation had already been “dreadful” due to the ongoing COVID-19 pandemic and the current unrest was furthering the great humanitarian suffering.

Condemning the violence by Israeli forces, especially against worshippers at Al-Aqsa Mosque during Ramzan, the foreign minister conveyed his deepest sorrow and condolences for the victims of lethal attacks by Israeli Defense Forces in Gaza and the West Bank. Qureshi, read the Foreign Office statement, also condemned the IDF’s continuous and indiscriminate attacks that had killed nearly 200 Palestinians and injured over a thousand others.

Reassuring Ambassador Rabaei of Pakistan’s ongoing efforts for peace in Palestine, the foreign minister also briefed him on outreach to foreign ministers of important regional partners.

Separately, Prime Minister Imran Khan and former Malaysian prime minister Mahathir Mohamad underscored a need for the international community to take urgent steps to halt the ongoing attacks on Gaza and facilitate a just and lasting solution based on U.N. resolutions and the two-state solution.

In a posting on Twitter, Mohamad said he had called Khan and exchanged views on the situation in Palestine and “the atrocities committed by Israel.” Both leaders condemned the Israeli aggression and expressed solidarity with Palestinians.

Khan, read a statement by the Prime Minister’s Office, also strongly condemned the attacks on innocent worshippers in Al-Aqsa Mosque and ongoing airstrikes on Gaza.