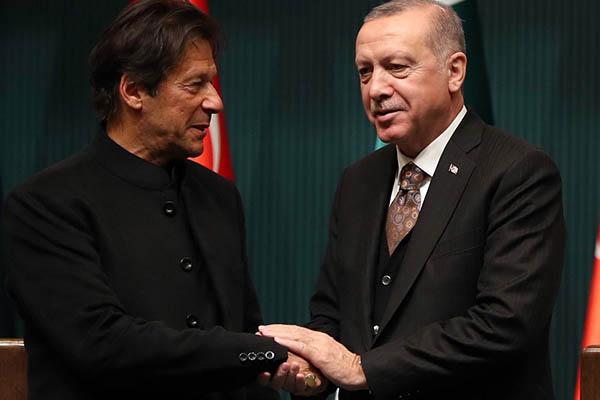 The leaders of Turkey and Pakistan, respectively, often find themselves at odds with the global community

Turkish President Recep Tayyip Erdogan and Prime Minister Imran Khan might not have much in common on the surface, but their penchant for populist rhetoric and views toward the West reflect a similar mindset that helps explain the state of both their nations at this juncture in time.

In a report published on Oct. 23, Al Jazeera noted: “Turkish President Recep Tayyip Erdogan moved to expel the ambassadors of 10 Western countries who appealed for the release of a jailed civil society leader. Seven of the ambassadors represent Turkey’s NATO allies and the expulsions, if carried out, would open the deepest rift with the West in Erdogan’s 19 years in power.” Erdogan’s decision came as the Turkish lira fell in value by 41 percent, a dramatic drop for a country that had once been seen as potential economic powerhouse.

For the sake of comparison, here’s what BBC reported on June 21 about P.M. Khan’s views on Pakistan’s ties with the U.S. “Pakistan’s prime minister has created a stir over comments he made about U.S. operations in Afghanistan. In an interview, Imran Khan categorically stated that he would not allow the U.S. to use Pakistan as a base for its Afghan operations. He told the interviewer that he would ‘absolutely not’ allow the U.S. to have the CIA in Pakistan to conduct cross-border counter-terrorism missions against Al Qaeda, the Islamic State group, and the Taliban.” Khan has repeatedly voiced criticism of Pakistan’s role in the U.S.-led war on terror and attracted outrage after he described slain Al Qaeda chief Osama bin Laden a “martyr” during a speech to Parliament.

Turkey in the Gulf

Erdogan has been ruling Turkey as president for nearly 20 years, often challenging states in regions where he wants to project the country’s power. Turkey’s power projection in the Mediterranean—from Libya to the eastern section of the sea—challenges Egypt and the allied Arab states of the Gulf. Qatar, a part of an intra-Gulf division, has a Turkish military base along with an American one, thus allowing Turkish entry into the region where an Arab vs. Iran quarrel is already unfolding.

Ankara’s cross-border competition with Iran in Shia-majority Iraq and Shia-ruled Syria is ongoing while Gulf Arab action in Yemen is countered by Iranian assistance to Shia Houthis. (Turkey’s leadership promised to carry out a new military operation against Kurdish forces in northern Syria but Ankara found itself having to tiptoe around the presence of U.S. and Russian forces there.)

When Sheikh Mohammed bin Zayed, the United Arab Emirates’ de facto leader, shook up the Middle East by agreeing to normalize relations with Israel, just two states in the region cried foul. Iran was predictably the first. Regime hardliners in the theocracy often call for the destruction of the Jewish state and deride the U.A.E. as an American stooge. The other was Turkey despite it being the first Muslim country to recognize Israel seven decades ago.

After Ankara raged that “the conscience of the region’s people” would “never forgive this hypocritical behavior,” President Erdogan threatened to withdraw Turkey’s ambassador to the U.A.E. Abu Dhabi had anticipated the outrage from both countries. But it was Turkey’s response that would have irked most. During the past 18 months, the U.A.E. has sought to reduce tensions with Tehran, and Emirati officials have insisted that U.A.E.’s Israel deal had nothing to do with Iran, saying Abu Dhabi “wanted to use diplomacy and de-escalation to resolve its issues with the Islamic republic.”

On China, Turkey in Central Asia often protests Beijing’s treatment of its Uighur minority, which is of Turkic origin. Its China policy differs from the one pursued by Pakistan, which is supportive of China’s Belt and Road project. Pakistan has in the past supported the Pashtun Taliban in Afghanistan while Turkey was supportive of its Turkic Uzbek minority led by Abdul Rashid Dostum in the north of the country.

Islamabad is a part of the Chinese project of joining China with Iran “through Pakistan” with a trade route. China has projects in Iran worth $400 billion while Turkey is more focused on the Iran-Azerbaijan quarrel where it supports Azerbaijan. In December 2020, Azerbaijan ousted Armenia from its Nagorno-Karabakh region in defiance of the regional superpower Russia; Turkey stood by it with military assistance. This action offended Azerbaijan’s neighbor Iran and placed the two states in a regional standoff. Pakistan, which enjoys good relations with Iran despite its internal sectarian complications, surprisingly decided to enter the foray on the side of Turkey.

Pakistan inclines to be pliable in the hands of President Erdogan and is often seen to be following his policies rather submissively. In 2016, Pakistan ordered more than 100 Turkish teachers employed at a chain of international schools to leave the country with their families after Erdogan requested action against them. Instead of freeing them, Islamabad decided to hand over the Turkish teachers to Turkey. The teachers worked at 28 popular PakTurk schools, which Erdogan had accused of being linked to his U.S.-based opponent, Turkish preacher Fethullah Gulen. President Erdogan, visiting Pakistan, welcomed the move.

Pakistan and Turkey vs. Iran in Azerbaijan

Pakistan recently did a strategic somersault: it joined Turkey against Iran. In mid-September 2021, Azerbaijan, Turkey and Pakistan staged large-scale joint military drills lasting two weeks, dubbed Three Brothers 2021, which was seen as military exercise between the three countries’ armies and “perceived as a hostile act in Tehran.” Faced with nationalistic popular pressure calling for a proportionate response, the Iranian army kicked off its own military drills near the border with Azerbaijan on the first of October, codenamed “Fatehan Khaybar”. Shortly after these military drills, Azerbaijan closed down a mosque and an office operated by the representative of Iran’s Supreme Leader Ayatollah Ali Khamenei in Baku.

Pakistan is supposed to approach intra-Islamic issues with great care. It stays close to the Arab states of the Gulf because they continue to absorb the largest number of Pakistani workers, apart from the reverence it shows to the Umrah and Hajj rituals in Saudi Arabia. It stays clear of the Arab-Iran conflictual politics in the Gulf despite the fact that the lion’s share of the foreign remittances come to it from the Arab states. Turkey has a powerful but eccentric leader who takes on Iran in its southeast and goes against the interests of the Arab states in the Gulf. (Its Qatar-based troops have actually divided the Arab states, some of whom have moved closer to Israel.)

Pakistan and Turkey vs. OIC

When Pakistan could not get the Organization of Islamic Cooperation (OIC) headquartered in Saudi Arabia to condemn India for annexing the disputed territory of Jammu and Kashmir, it got together with Turkey to stage an “alternate” OIC summit of their own in Malaysia in December 2020. This attempt by Turkey and Pakistan—the Malaysian prime minister who joined them was fired by the Malaysian King later—to hold their own OIC summit seriously offended Saudi Arabia, compelling it to ask Pakistan to return the latest dollar handout it had made to stabilize its tottering economy.

Pakistan was subsequently forced to pull out of “the summit.” And Pakistani Foreign Minister Shah Mahmood Qureshi had to say: “Pakistan’s Gulf allies, Saudi Arabia and the United Arab Emirates, had expressed reservations over Islamabad joining the summit, hosted by Malaysian Prime Minister Mahathir Mohamad in Kuala Lumpur.”

Prime Minister Khan resembles Erdogan in some ways. He is an assertive Islamist whose antipathy towards the U.S. is at times quite open. His ambivalence towards the strategically and economically important Gulf Arab states is demonstrated when he goes along with Erdogan knowing that it will offend the Arabs. He knows that Iran is crucially important to Pakistan and has to tread a careful path between the Arabs and his neighbor and its Shia Islam and a deeply influential literary-linguistic nexus with the people of Pakistan. Iran is important to Pakistan because of CPEC, as China already has a significant economic presence in Iran compared to Pakistan.

The Pakistan-Iran relationship is natural as contiguous states and remains economically crucial. The two signed an agreement in 2003 under which Iran had to daily supply 35 megawatts to Balochistan’s coastal belt. In 2011, the agreement was extended, and Iran was asked to increase the capacity to 70 megawatts. Five years later, when construction work in the deep-sea port of Gwadar gained momentum, 30 megawatts were added to the power supply and Iran has since been selling 100 megawatts to Pakistan to light up its coastal areas.

Daily The News, in a report published on Sept. 5 noted: “In the third week of August, protests erupted in the otherwise calm coastal town of Gwadar. Workers of all political parties, fishermen and members of civil society gathered in the city center and blocked roads, burnt tires and used other means to express their anger towards the government. These protests continued for a couple of days and received much attention on social media but were ignored in mainstream media. On Aug. 17, a strike was called by the protesters. Although the strike was peaceful, the district administration tried to prevent it by force. This resulted in an altercation with the protesters; two of the protesters were injured.” Pakistan’s Balochistan province remains extremely underdeveloped and vulnerable to the cross-border Taliban sallies from Afghanistan.

Pakistan under Prime Minister Imran Khan is an economically threatened state with its rupee losing its value and putting the common man at risk. In Turkey, under President Erdogan, the Lira has fallen by 41 percent in 2021 alone. According to one report: “There are already signs that the economy has moved into that stage. Many Turkish consumers seeking to buy electronic products online today—such items are seen as a possible store of value in inflationary times—were unable to do so amid signs that some retailers are now unwilling either to take the risk of accepting the lira. They included Apple’s website in the country.” In Pakistan, the rupee continues to fall against the dollar sending shock waves across the economic board. The currency has lost value plummeting from an already low of 152 to a dollar to 173.

As for NATO-member Turkey’s hostile policies towards its “strategic ally” the U.S., Carnegie Institute had to sound this warning in January 2021: “Economic sanctions are more powerful when targeted at allies than adversaries, because there are more (and more important) economic ties between allies. For example, the United States is Turkey’s fourth-largest source of imports and fifth-largest source of exports—just two measures of the links between the Turkish and U.S. economies.” The fall of the Turkish Lira is comparable to the fall of Pakistani Rupee in 2021.