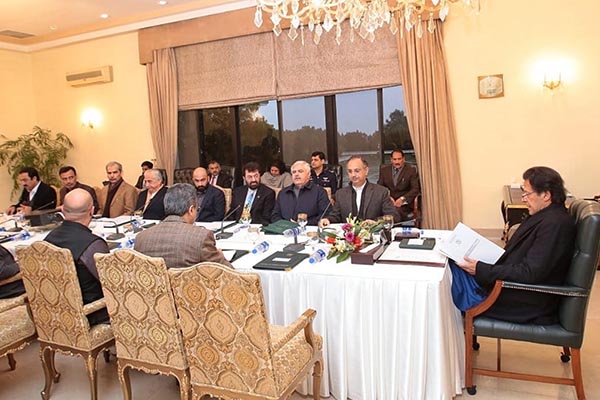 The Pakistan Tehreek-e-Insaf-led government is aware of “external elements” seeking to sow unrest in the former “tribal areas” that have since been merged into Khyber-Pakhtunkhwa province, Prime Minister Imran Khan said on Monday, vowing to defeat all conspiracies with the help of local residents.

Presiding over a meeting to review various development projects of Khyber-Pakhtunkhwa province, with particular reference to the regions that had once been known as the tribal areas, Khan said key to ensuring local cooperation was to include stakeholders in decision-making and timely resolution of all problems. He said the government was dedicated to ensuring the previously neglected tribal areas were brought at par with the rest of the country. The prime minister did not clarify what “external elements” he was referring to, but the Pashtun Tahaffuz Movement over the weekend hosted a rally in Bannu in which it called for an end to extrajudicial killings and backed a united Pashtun body to fight for the rights of their community.

During the Islamabad meeting, the prime minister was informed that the Finance Ministry had already allocated funds to ensure uninterrupted progress on development projects in the merged areas. He was also informed that the federal government would immediately disburse funding required to expedite the implementation of development projects in the formerly federally administered tribal areas (FATA).

Reviewing the progress of projects under the Public Sector Development Program, the prime minister backed the provincial government’s proposal to complete 16 development projects on priority basis and issued directions to the ministries of Finance and Planning to follow through. The participants of the meeting also provided Khan with suggestions on how best to utilize oil and gas royalty payments from Karak, Hangu and Kohat.

The prime minister said the utmost priority should be given to projects related to the provision of clean drinking water. He also stressed on the need for a national solid waste management policy to ensure cleanliness in cities and find a means to utilize waste for energy generation.

The meeting was also briefed on the financial requirements of universities in Khyber-Pakhtunkhwa. The prime minister said investment in education, especially higher education, was a priority of the government, and all possible efforts would be made to fulfill the universities’ needs.

Khan also directed the Planning Commission to fulfill Rs. 5 billion requirements for major hospitals of the province to ensure the provision of uninterrupted and quality healthcare facilities.