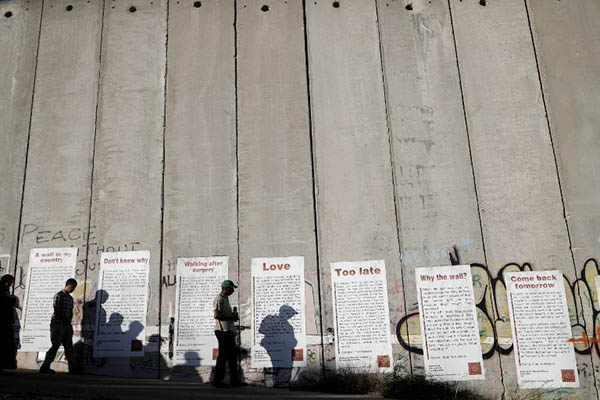 The border wall in the West Bank. Thomas Coex—AFP

Following multiple media reports that Pakistan is “under pressure” to recognize Israel, the country’s Ministry of Foreign Affairs and Prime Minister Imran Khan have strongly denied any such development until the rights of Palestinians have been ensured. While the principled stance is to be appreciated, Pakistan cannot long ignore what is occurring in the Arab Middle East today to provoke such questions over its continued resistance.

There are currently three developing centers of Muslim power fighting for the “soul of Islam.” There is the familiar-to-Pakistanis Saudi Arabia, where Muslims from all over the world congregate for Haj; there is also the United Arab Emirates, which most Pakistanis lump together with Saudi Arabia. They seldom think of Qatar, whose less strict version of Wahhabism, and penchant for political Islam, never looks like a contestant version of Islam. Thinking of Turkey, they simply think of the Caliphate of history and of a rather belligerent President Erdogan, taking him as a defiant manifestation of Islam against the West.

For Pakistan, Saudi Arabia was ever the generous boss calling the shots; and the Emirates looked to simply be tagging along. To some extent it was with Pakistan’s backing that Saudi Arabia wielded conservative muscle in the Islamic world. Pakistan’s loyalty to Saudi Arabia netted some state-level generosity, but also enriched and empowered the various religious organizations that tended in time to get out of Pakistan’s control. What went subsurface was the anti-Shia message expressed through these recipients of Saudi largesse after the 1979 Iranian revolution.

The anti-Soviet war in Afghanistan of the 1980s gave rise to “bagmen”—carriers of Saudi cash—dishing out money to the Sunni warriors there, but not without the irony of “private cash” that flowed through Osama bin Laden’s Al Qaeda and spread an anti-American, and therefore anti-Saudi, message in the region. Saudis achieved the same kind of effect in Bosnia Herzegovina, in aid of foreign fighters confronting Serbia in the 1990s; also Palestine in Israel; and in Syria, where Islamists fought the regime of Bashar al-Assad.

Receipt of donations by Sipah-e-Sahaba, a banned virulently sectarian group that attacked Shias in Pakistan, and its successors and offshoots, bore the names of a Saudi donor. However, the image Saudi Arabia built itself in those days changed drastically with the rise of Crown Prince Mohammed bin Salman (MBS) in 2013. The image of Islam sought by him is diametrically opposed to what the Saudis had pursued in the past: tolerant, forward-looking, and outward rather than inward-looking. Schoolbooks are being cleansed of supremacist and racist references in a slow process initiated after the 9/11 Al Qaeda attacks in New York and Washington.

What has gone unnoticed in Pakistan after MBS’s watering down of Wahhabi Islam and interfaith dialogue are his public interactions with Jewish and Christian leaders. If one thought that the Saudi label fitted the Islam of Afghan jihad, it is no longer so. In the field today are additional champions of the Islamic message: the United Arab Emirates, Turkey, Qatar, and Indonesia. The new phase of the struggle for the soul of Islam is on us. There is today the Saudi-U.A.E.-led war to counter Iran in Yemen. There is Emirati, Egyptian and Turkish support for the opposing sides in Libya’s civil war; and there is Turkish and Gulf state-involvement in Syria.

The resurgence of political Islam as a result of the 2011 popular Arab revolts that toppled leaders in Egypt, Tunisia, Libya, and Yemen, fueled the worst fears of men like Saudi Crown Prince Mohammed, Egyptian General-turned-President Abdel Fattah al-Sisi, and U.A.E. Crown Prince Mohammed bin Zayed. The last-named bin Zayed has become more assertive in the region than most Pakistanis notice. He has flagged the U.A.E.’s uncannily “200 years of wars with Saudi Arabia over Wahhabism.” He has played a key role in shaping MBS’s policies to remove Wahhabism’s rougher edges and to bring the U.A.E. and Saudi Arabia’s religious soft power in a single focus. What Pakistanis found incomprehensible was a visit to the Emirates by Pope Francis in 2019 when he signed a Document on Human Fraternity with Al Azhar’s Grand Imam.

Oddly, Qatar doesn’t think like the Saudi-U.A.E. camp. It doesn’t look at the Muslim Brotherhood of Egypt with any fear; in fact every time it supports the Brotherhood with funds, hackles rise in Jeddah and Dubai. Bin Zayed backs Al Azhar, which is opposed to Brotherhood and, together with Saudi Arabia, it doesn’t take kindly to the fact that Qatar has a Turkish military base on its soil with 5,000 troops to flex its muscle. Qatar supported the victory of Muslim Brotherhood in Egypt; but Bin Zayed in 2013 financed the military coup that ousted Prime Minister Muhammad Morsi from power. In 2017, U.A.E., Saudi Arabia, Bahrain and Egypt declared diplomatic and economic boycott of Qatar.

The rise of Turkey and its entry into the Gulf through Qatar has to be understood before examining the factors compelling Saudi Arabia and the U.A.E. to seek close ties with Israel. BBC, exploring Turkish assertion in the region notes: “In the last few years, Turkey has launched three military incursions into Syria; sent military supplies and fighters to Libya; deployed its navy to the Eastern Mediterranean to assert its claims in the region; expanded its military operations against Kurdish PKK rebels in northern Iraq; sent military reinforcements to Syria’s last rebel-held province of Idlib; recently threatened a new military operation in northern Syria to confront terrorist armed groups. Turkey also has a military presence in Qatar, Somalia and Afghanistan and maintains peacekeeping troops in the Balkans. Its global military footprint is the most expansive since the days of the Ottoman Empire.”

In Pakistan, few comprehend the developing situation in the Gulf and the assertion of Turkey in the region. Prime Minister Imran Khan likes President Erdogan for his defiance of the West but he should understand that the fatal flaw of most brave men becomes manifest through the “heroic” isolation they need for their charisma. The Arab embrace of Israel enhances the isolation of Turkey and all those who decide to stand behind President Erdogan’s assertion in Eastern Mediterranean, in the Gulf through Qatar, and in Syria, Lebanon and Yemen against Sunni Arabs and Shia Islam. Turkey will compel Europe and America to support the Arab-Israeli front against Turkey. Anyone outside the Arab camp will be isolated and, in the case of Pakistan, will suffer political and economic damage.