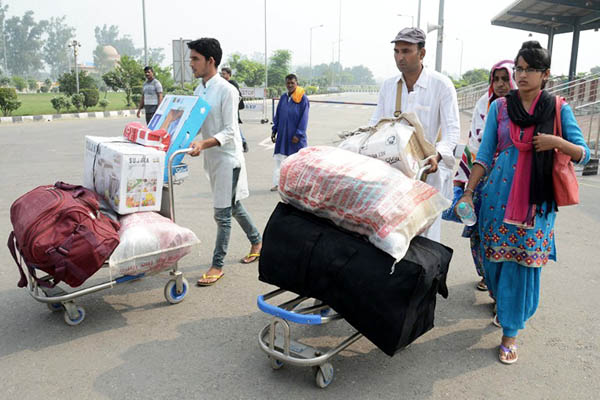 Indians, Pakistanis hope rising tensions will not prevent them from visiting relatives in neighboring nation.

Mohammad Iftakar waits with sweets and gifts at the Wagah border crossing, a lifeline for families violently separated during the founding of India and Pakistan, fearful of dangerous new divisions as hostilities flare once again. Like many Indians, he has extended family on both sides of the frontier and travels regularly between the nations that were divided after independence from Britain in 1947.

He worries authorities might close the main border crossing at Wagah in India’s northern Punjab state, leaving families like his in limbo, after New Delhi said it had conducted military strikes inside Pakistan. “There are some agencies and jihadi groups in Pakistan that don’t want peace, but all of the other people are like us,” said Iftakar, who was traveling with his wife and two sons and carrying bags loaded with sweets and gifts. “They [Pakistanis] love us and they too want close relations between our two countries,” he said, before clearing customs and making the short walk to the border crossing.

The wealthy farming state of Punjab was divided between India and Pakistan at Partition, becoming the epicenter of the violence in which at least a million people were killed as Hindus fleeing the newly formed Pakistan clashed with Muslims moving the opposite way.

Iftakar, whose wife Aarafa is from Pakistan, nervously remembers when India shut the border in 2001 after Pakistani militants staged a deadly attack on the parliament building in New Delhi.

The Wagah crossing itself is famous for its colorful “flag lowering” ceremony, which draws huge cheering crowds on both sides of the border post each sunset to see the display of military preening and pageantry. The ceremony was briefly closed to the public on the Indian side after the strikes in disputed Kashmir to the north of Punjab, which have led to a spike in tensions between the neighbors.

India says it has no desire for a further escalation in the situation, but has nevertheless ordered thousands of villagers to move away from the border in Punjab.

India and Pakistan have fought three wars since independence seven decades ago. Last week’s alleged strikes followed a deadly assault on one of India’s army bases in Kashmir that Delhi blamed on Pakistan-based militants.

Islamabad has dismissed India’s claim to have conducted surgical strikes across the border as an “illusion,” insisting any such incursions would be impossible and attributing unrest to ongoing exchange of fire across the Line of Control.

At the customs hall, not far from India’s Sikh holy city of Amritsar and a short distance from Pakistan’s Lahore, Ghulam Ali said he feared the regional tensions would further delay a reunion with his wife. “Our families have lived in the same region for generations,” the 40-year-old Muslim told AFP.

Since marrying his Pakistani wife two years ago, he has been trying without success to secure a visa for her to live with him in India’s Rajasthan. Instead, Ali, who works as a milk supplier, makes frequent visits across the border to see his wife and son. “What some in Pakistan are doing is wrong of course,” he said. “But I hope that the governments, particularly our government, ensures that people like us, who have families across the border, don’t have problems traveling and meeting each other.”

“We are the same people.”

The road leading to Wagah is normally choked with auto rickshaws and taxis. But it has been largely deserted in recent days, with many tea stalls and other roadside eateries shut.

Mohammad Shahid, whose mother and sister were heading to a relative’s wedding in Lahore, said he too hoped for a quick thawing of hostilities. “I hope the governments sit and talk with each other,” he said. “We haven’t experienced such tension between the countries in a while.”