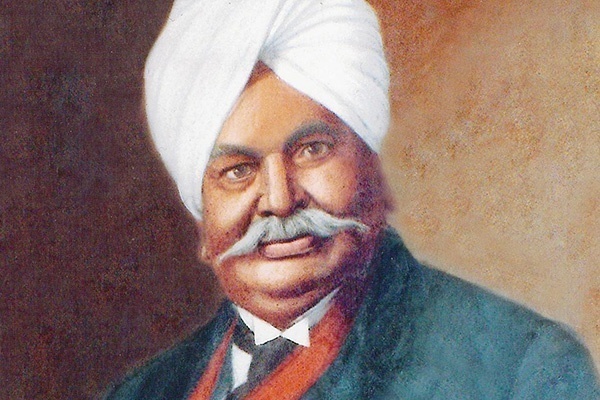 Looking back at the legacy of Sir Ganga Ram, whose commitment to civil works in the Punjab capital remain unmatched

Baroness Flather of the U.K., Sir Ganga Ram’s great granddaughter, visited Lahore in 1998 and mentioned that her ancestor had also built the luxurious Model Town housing society on the city’s outskirts. In fact, he helped founder Dewan Khem Chand conceive and build Model Town in the same way he liberally financed the city’s Salvation Army and YMCA buildings on the old Queen’s Road, where he had already built his Free Hospital.

Ganga Ram was born in 1851 in a Sikh sadhu’s hut in Mangtanwala, about 40 miles from Lahore and 14 miles from Nankana Sahib, the famous Sikh shrine. His father Daulat Ram was a Hindu who had fled from Muzaffarnagar near Delhi to escape the post-Mughal chaos. Good at Persian, he soon found the job of a junior sub-inspector at a police station in Mangtanwala. He later moved to Amritsar to become a copyist of the court. Here, Ganga Ram passed his matriculation from Government High School and joined Government College Lahore in 1869. The College was then only four years old and was housed in Haveli Raja Dhyan Singh, brother of the Dogra raja who was later to possess Kashmir.

Ganga Ram was admitted on scholarship, and stayed frugally in a hut in Sutar Mandi to save money. He was good at mathematics, and won another scholarship to Thomason Engineering College at Roorki in 1871 where Colonel Maclagan was principal. He sent half his scholarship of Rs. 50 to his poor parents while he worked hard to obtain his engineering degree. (It was Colonel Maclagan’s son who, as governor of Punjab, recommended Ganga Ram for knighthood in 1922.) In 1873 Ganga Ram completed his degree with a gold medal, was appointed assistant engineer, and apprenticed to Rai Bahadur Kanhaya Lal, chief engineer of Lahore.

In 1885, he was in Lahore as assistant engineer. According to The Journal of Indian Engineering, he built the new High Court building on the Mall, and the Lahore Cathedral in 1887, and was asked by chief engineer Sir Aeneas Perkins to design and construct the Aitchison Chiefs’ College as special engineer in 1889.

He went on to build the courts and government offices in Lyallpur (Faisalabad), Sargodha and Sheikhupura. It was then that he received the title of Rai Bahadur. After he had built the Chemistry Department building of the Government College Lahore, Principal A.S. Hemmy had this to say: “Indeed, one might almost speak of a Ganga Ram period of architecture [in Lahore] of which the Government College Chemical Laboratory is an example.” Ganga Ram took out patents for a special slide-rule that he invented for calculating beams and trusses, and the design for special roofs and interlocking bricks.

Ganga Ram, as ex-officio municipal commissioner of Lahore, gave it the new waterworks and built his house Ganga Ram Niwas in Anarkali, which was then the area that housed the city’s elite. His eldest daughter’s son, Aftab Rai, was honorary secretary of the Sir Ganga Ram Trust in 1940 when B.P.L. Bedi wrote the only biography of Ganga Ram.

In 1927, leaving for England to attend a meeting, he predicted that he would not return home alive. He died at his London home with his son Rai Bahadur Sewak Ram at his side. His body was cremated and the ashes brought back to India, a portion of them consigned to Ganga river at Hardwar by Sewak Ram and another taken to Lahore and put in his Samadhi by Balak Ram on the bank of the river Ravi near where he had built his Home of the Disabled as his last act of charity.

With so many of his civil works still in use—and hailed as representing its best architecture—no one else in the history of the Punjab capital can challenge Sir Ganga Ram’s title as the ‘Father of Lahore.’