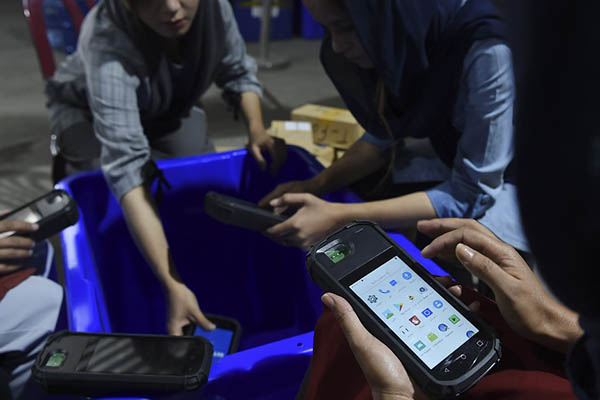 In a dusty Kabul suburb, hundreds of workers check and recheck biometric fingerprint readers—part of a massive effort to ensure Afghanistan’s upcoming presidential election is not tainted by fraud allegations that have marred previous polls.

The young employees at the Independent Election Commission (IEC) are rushing through final technical preparations for the vote, set for Sept. 28. The stakes for the IEC are high, with the question of turnout in Afghanistan’s fourth presidential election since the fall of the Taliban crucial to whether it is seen as fair and transparent.

The Taliban have openly threatened to disrupt the polls, and killed 26 people in a bomb blast at a campaign rally being held by President Ashraf Ghani earlier this week. Turnout in previous polls has historically been low. The United Nations estimated it at around 32 percent for the 2009 elections, while no credible figure was available for the 2014 vote.

Each time the exercise has been tainted with accusations of irregularities—particularly in 2014. Then, Ghani and rival Abdullah Abdullah both claimed to have won, plunging Afghanistan into months of crisis before the U.S. and the U.N. pressured them to form a ‘national unity government,” with Ghani as president and Abdullah his chief executive. The two are once again facing off in 2019 as the likely favorites, underscoring the comparison to 2014.

“People have lost their trust and confidence because of serious fraud in the past elections,” said Sughra Saadat, spokeswoman for the Transparent Election Foundation of Afghanistan (TEFA). “So far, election bodies have failed to restore people’s trust.”

Without such faith in the process, it is hard to see why voters should risk their lives to participate. Yet the winner will need a strong mandate if he wants to pose as an interlocutor with the Taliban in any future talks.

The insurgents have always considered Ghani a “puppet” of Washington, and ensured he was sidelined from talks—which have since fallen apart—between Washington and the Taliban that would have paved the way for the U.S. to begin withdrawing troops. If re-elected, Ghani hopes to put the Afghan government back in the mix.

The IEC’s chairwoman, Hawa Alam Nooristani, assured AFP that this vote will be different “because we have worked on rules and regulations, procedures and mechanisms to prevent fraud.”

Supervisors in Afghanistan’s 34 provinces were recruited in a process overseen by independent organizations such as the TEFA, she added. Her secret weapon—the biometric fingerprint readers which are meant to prevent people from voting more than once—were used during the chaotic legislative elections in October last year, but they were only introduced at the eleventh hour.

Untrained staff struggled with glitches such as the devices running out of power, and the result was at best mixed. This time, she says, all the necessary precautions have been taken—in particular, getting technicians from the German company, which makes the readers to train the IEC workers directly.

All observers expect a further wave of violence from the insurgents, who want to undermine the future head of state by discouraging as many of the 9.6 million voters as possible from going to the polls. Nearly 500 polling stations have already been excluded because security could not be guaranteed, leaving 4,942 across the country to be protected by 72,000 members of the security forces.

The IEC’s huge complex is itself a tightly guarded fortress, with four checkpoints and as many barriers to cross before visitors can access it.

Under a blazing sun, workers unload long bundles of canvas from a truck—tents that will serve as polling stations in rural areas without the necessary facilities. Gray metal hangars house the technical operations. Under one, the voices of around a hundred young people can be heard as they activate and test the biometric readers before stacking them in large blue plastic boxes.

In the next hangar, men fill the same blue boxes with sealed ballots, voter registers, and a variety of materials to guarantee the integrity of the ballot. Those include invisible ink to mark voter registration cards, with the mark only visible under the light of a small torch contained in the box, batteries included.

Then there’s the traditional, low-tech safeguard: bottles of indelible ink into which every voter will dip their finger as they vote. “It will make a difference,” Farid Nader, a supervisor, says hopefully. “Young people will trust the election.”