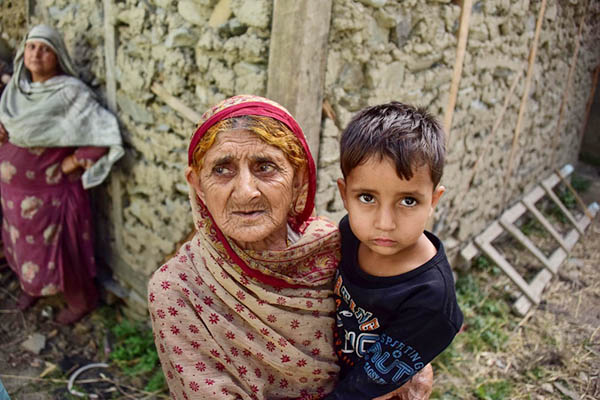 A woman in Pakistan-administered Kashmir holds a child as she stands outside her damaged house following recent cross-border shelling at the Line of Control. Sajjad Qayyum—AFP

Roads were empty, shops shuttered, and hotels vacant in Pakistan-administered Kashmir on Tuesday, as tension mounted along the de-facto border with India following Delhi’s decision to bring part of the disputed Himalayan territory under its direct control.

Fears have spread throughout the Pakistani side of Kashmir that hostilities may reignite between the rivals, following the stripping of India-Occupied Kashmir’s autonomous status on Monday by Indian Prime Minister Narendra Modi.

“My brother lives in Srinagar [in India-Occupied Kashmir]. He has small children,” Shafiq Butt, a shopkeeper in Pakistan’s Neelum Valley, told AFP. “We haven’t heard from them for the past three days. We don’t know if they are alive or have been killed.”

Delhi’s abolishment of India-Occupied Kashmir’s special status followed accusations by Islamabad over the weekend that the Indian military had used cluster munitions over the Line of Control (LoC) separating the two countries. India denied using the munitions.

As tensions mounted, Prime Minister Imran Khan vowed during a joint-session of parliament on Tuesday to take up the Kashmir issue with the United Nations while warning Delhi’s decision would likely incite more violence in the region.

“People are leaving but I have nowhere to go,” said Khursheeda Begum, 60, from her home. “I am a widow and have four small kids. I don’t have any other source of income and I am really worried because my house was damaged by Indian shelling.”

The summer season usually sees tourists from across Pakistan flock to the pristine Himalayan valley, but officials in Kashmir said hotels and guest houses stood empty as people shied away from entering the area. “There are around 300 guest houses in the valley and today there is not a single guest in any of them,” said Raja Shahid Mehmood, a deputy commissioner in the area. “Tourism in the Neelum Valley has been reduced to an all-time low.”

India-Occupied Kashmir has been in the grip of a rebellion against Indian rule since 1989, and analysts have warned the scrapping of its autonomous status could trigger fresh unrest. Kashmir has been divided between India and Pakistan since their independence in 1947. The two sides have conflicting claims on the territory, and have fought two wars over it.

Tensions remain high between India and Pakistan after the neighbors launched tit-for-tat airstrikes in February following a suicide bombing perpetrated by a local separatist but claimed by Pakistan-based militants in India-Occupied Kashmir. Since then they have stepped back from the brink, but firing between the two sides across the de-facto border dividing Kashmir has continued.

Locals fear a new round of hostilities may be unfolding. “Usually things return to normal after a few days when there is tension along the Line of Control but this time it seems like this situation will persist for a very long time,” said another resident, Raja Aqeel. “I can’t see the return of normalcy anytime in the near future.”