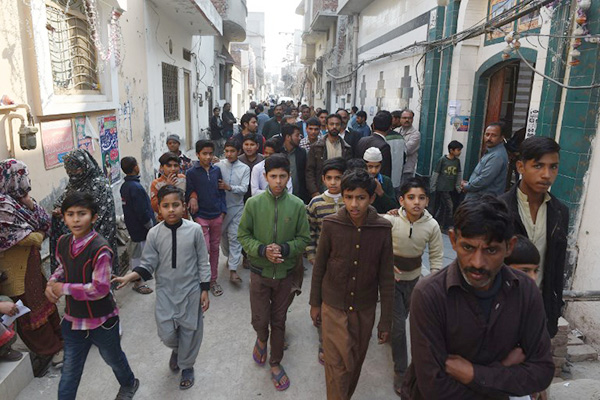 The rape and murders of a dozen children by a suspected serial killer have terrified parents in central Pakistan, and prompted soul-searching over how the country fails to protect its most vulnerable.

The killing of six-year-old Zainab Fatima Ameen became the tipping point last week when her body was found on a rubbish heap near her home in Kasur. Candlelight vigils were held across the country and the hashtag #JusticeForZainab trended on social media, with celebrities, opposition politicians and outraged web users demanding action.

But grief spilled over into anger in Kasur, a city already infamous for child abuse after a massive pedophilia ring was exposed in 2015. Zainab, officials said, is the 12th child found raped and murdered in the city within a two-kilometer radius in the last two years.

The discovery of her body sparked riots in Kasur, with thousands swarming police stations and setting fire to politicians’ homes, accusing authorities of inaction. At least two demonstrators were killed after police opened fire on the crowds.

A spokesman for the Punjab government said the suspect was likely “a lunatic with psychological disorders.”

Television stations have repeatedly broadcast chilling CCTV footage purportedly showing the young girl walking hand-in-hand with an unidentified male in what may have been her last moments.

Kasur is notorious for such heinous crimes. In 2015, officials uncovered a huge pedophilia ring in the city. At least 280 children were sexually abused on camera by men who later blackmailed their families, threatening to leak the footage.

Police conspicuously failed to act despite pleas from parents, only making arrests after clashes between relatives and authorities dragged the issue into the spotlight. From January to June 2017, there were 129 cases recorded in Kasur—including rape and murder—according to Sahil, an aid group that works on child protection issues.

Parents interviewed by AFP appeared overwhelmed once again by their powerlessness. “The district police chief told us if they can’t arrest the culprit then what can they do,” said Muhammad Ayub, whose eight-year-old niece was raped and killed in July last year. Just one child is believed to have survived an attack.

The six-year-old girl has spent months in intensive care, paralyzed from the neck down and unable to speak after being raped, tortured and left for dead at a garbage dump in November. “Cameras should be installed in the streets on every turn for protection of the children… how can mothers accompany their children all the time?” asked the survivor’s aunt. “How can I be satisfied… we don’t know what’s happening,” raged Zainab’s father Ameen Ansari at his home, where he blasted the police for inaction. “They have not shown any interest at all.”

Authorities, however, remain confident. “I’m pretty sure that within a few days maybe we will present the main accused,” said district police chief Zahid Nawaz Marwat.

Such assurances are not enough for the people of Kasur. “We have been forced to lock our kids inside our homes,” said resident Ghulam Fareed.

Pakistan criminalized child sexual abuse for the first time in 2016, after the initial pedophilia scandal broke. But with sex education nonexistent in the conservative country, experts fear that an untold number of abuse cases continue to go unreported.

“Always the powerful are abusers and the weak are the victims,” said Manizeh Bano, the executive director of Sahil.

Such fears are not limited to Punjab.

Recent media reports have pointed to rampant sexual abuse of children in unregulated madrassas across the country, while a 2014 documentary highlighted how young boys in Peshawar are often abused for sex.

For Zainab’s family, any change will come too late. “They were unable to find my daughter for five days,” her mother Nusrat Bibi said through tears. “I had educated Zainab [on] how to deal with strangers if they try to trap you,” she cried. “The girl was very wise and obedient.”