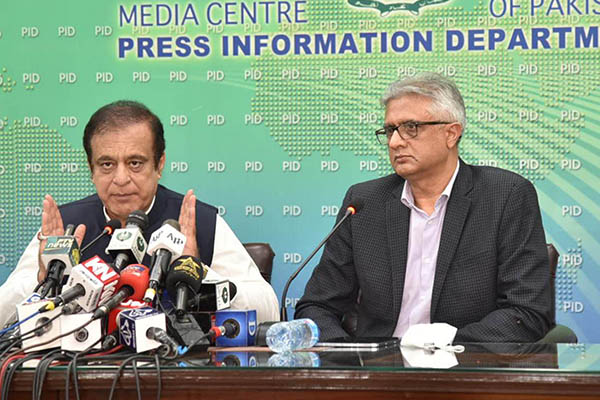 The federal government on Tuesday announced it was allowing pharmaceutical companies to increase prices of 94 lifesaving medicines to end their chronic shortage in the market.

“To address long-term shortage of some key or lifesaving medicines, the federal cabinet has allowed rationalizing prices of drugs that had been reported to be in short supply due to unrealistically low prices,” Special Assistant to the P.M. on Health Dr. Faisal Sultan told journalists during a joint press conference with Information Minister Shibli Faraz.

He said prices were increased on drugs that were in the “hardship category,” as recommended by the Drug Pricing Committee under the Drugs Pricing Policy of 2018. The “hardship category” is a clause that allows increasing medicine prices for a company that stops the manufacturing of medicines by claiming its production has become non-viable due to high cost of production.

Sultan claimed the price hike would curb the sale of such drugs in the black markets as their market rates would no longer be “unrealistic.” He said the medicines that would witness price hikes included furosemide injections for emergency use in high blood pressure cases; acetazolamide tablets for glaucoma; hydralazine tablets to lower blood pressure and carbamazepine tablets for epilepsy.

He claimed the prices had to be increased due to an increase in prices for raw materials in the international market, devaluation of the Pakistani rupee, and an increase in the price of packaging material. He said some drugs, such as Remdesivir that is used to treat COVID-19, would actually see their prices reduce, saying it would be marketed for Rs. 8,244 from Rs. 10,873.

According to a statement issued by the Federal Ministry of Health, the designated maximum retail prices would remain in place until June 30, 2021.

The information minister, meanwhile, said the cabinet was briefed on the Anti-Rape Investigation and Prosecution Bill, which hopes to curb sexual assault through swift prosecution, protection of victims, use of modern technology for investigation and imposing severe punishments. “The cabinet has also approved re-classification of seven cantonments under the Cantonment Act, 1924,” he said.

Faraz also said the circular debt in the power sector had climbed to Rs. 2.1 trillion, claiming the government was looking for ways to curtail it. He said the cabinet had approved the closure of public-sector power projects, which are running into losses. Despite being in power for over two years, he blamed previous governments for this debt.

He said the prime minister had also directed all cabinet members to refrain from discussing sectarian issues to prevent “the enemy” from fanning sectarian hatred. “I believe that we should not indulge in any discussion that harms religious harmony and our armed forces,” Prime Minister Imran Khan was quoted as saying.