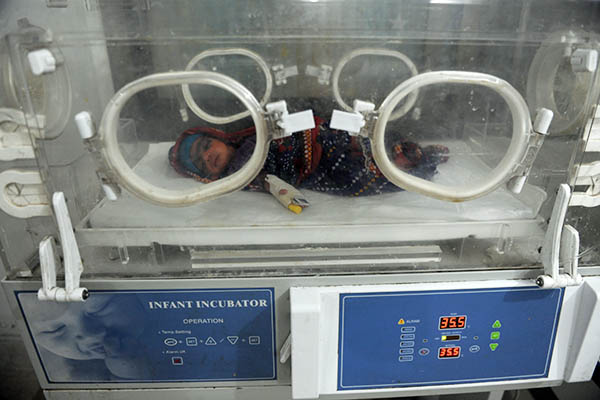 Three newborns died at a District Headquarters Hospital in Sargodha on Friday, raising the death toll over 24 hours to 15, allegedly due to lax healthcare facilities.

“Three more infants died this morning due to unknown reasons,” said a staff member on condition of anonymity, as he was not allowed to speak to media. “Yesterday, we had 12 casualties in the Nursery Ward of the hospital,” he added.

Parents of the deceased infants claim they died due to insufficient oxygen supply, but Salman Rafiq, special assistant on health to Punjab’s chief minister, told journalists that the newborns had died to complications caused by premature births.

“How is it possible that all these babies were born prematurely,” said Saleem Chaudhry, the father of one of the deceased infants. “This isn’t just one or two infants … we’re talking about 15 babies,” he added.

Dr. Adilla, another staff member, told Newsweek via phone that the parents’ concerns were well founded. “The oxygen supply being provided to the infants was insufficient to meet the needs of newborns,” she said. “We don’t have enough incubators to guarantee oxygen to every child and are in dire need of such machines here,” she added.

Punjab Chief Minister Shahbaz Sharif had initiated an inquiry, led by a three-member committee, to probe the reasons behind the deaths. A report has already been submitted, according to local media.

this credit goes to our cruel, corrupt, senseless , fraud, decoits,dishonest & selfish rulers. they will e answerable to God for their each & every act they are doing.