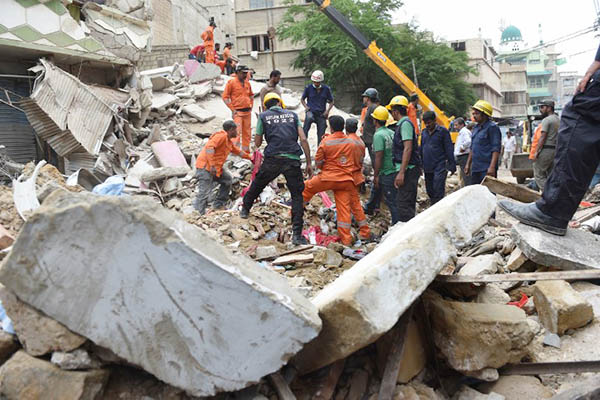 Five people died when an apartment building collapsed in Karachi early on Tuesday, as most of its residents were sleeping, officials said.

Rescuers struggled to pull survivors from the rubble of the three-storey building. “Five bodies were recovered from the rubble,” the city’s deputy commissioner, Fareed Uddin, told AFP.

Another local official said a woman and a 13-year-old boy were among the dead.

Rescuers pulled at least nine injured people from the debris.

Karachi—a booming megacity of some 20 million people—has expanded rapidly over the last decade. The number of poorly constructed buildings, thrown up to meet the needs of the rapidly growly population, has grown quickly.

The mayor of Karachi, Waseem Akhtar, visited the scene of the accident on Tuesday afternoon and hit out at the local building department for failing to enforce construction codes.

At least 44 people were killed when a factory collapsed in Lahore in 2015, an accident also blamed on poor building standards.