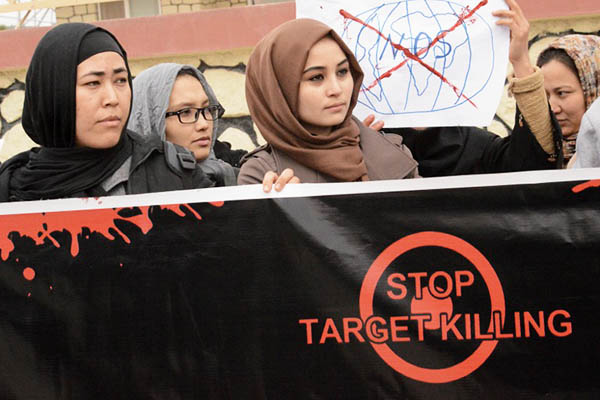 No group has claimed responsibility but government officials believe it could be the Taliban or Islamic State militants.

The ethnic Hazaras were kidnapped on Wednesday in the restive province of Ghazni after they traveled out of their home district to shop for cattle.

“Their bodies were found today afternoon in Malistan district. All five were beheaded,” district governor Ramin Ali Hedayat told AFP, claiming that insurgents linked to the Islamic State group were behind the killings.

But Ghazni’s deputy governor laid blame on the Taliban, saying the group that has been waging a 13-year war against U.S. and Afghan forces were seeking the release of their fighters held by the government.

“Their demands were not met so they beheaded the Hazaras,” Mohammad Ali Ahmadi told AFP without offering any more details.

No group has so far claimed responsibility for the beheadings, which come after the high-profile abduction of 31 Hazaras in southern Afghanistan in February, whose whereabouts are still unknown. Those kidnappings triggered speculation that the men had been seized by Afghan insurgents who have pledged allegiance to I.S.

The Taliban have seen defections to I.S. in recent months, with some insurgents voicing their disaffection with their one-eyed supreme leader Mullah Omar, who has not been seen since the 2001 U.S.-led invasion of Afghanistan. The Afghan government has also raised the ominous prospect of I.S. making inroads into the country, though the group that has captured swathes of territory in Syria and Iraq has never formally acknowledged having a presence in Afghanistan.