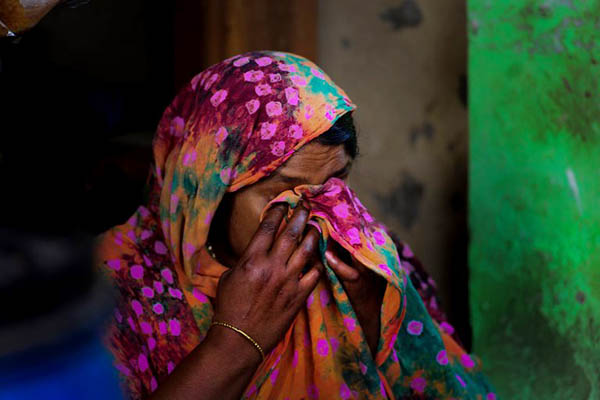 The pain of waiting 10 hours with her leg crushed by bodies under the rubble of the Rana Plaza factory was hell for Nilufer Begum. But the five-year wait for justice has been just as agonizing.

Bangladesh on Tuesday marks the fifth anniversary of one of the world’s worst industrial disasters, a building collapse that killed more than 1,130 workers and spotlighted the Western clothing brands benefiting from the country’s low wages. But there is mounting anger this anniversary over the glacial pace of the court case against those arrested in the aftermath of the tragedy.

The weight of three bodies and rubble crippled Begum’s right leg on April 24, 2013. The 38-year-old has had to undergo operations, which have cost twice the $3,500 compensation she received, forcing her to borrow from relatives and charities.

“I am counting the hours to my death. The muscles in my leg are wasting away. My kidneys are failing,” Begum, who now runs a grocer’s store near the factory ruins, told AFP. More than 2,000 injured workers from the nine-storey complex, which collapsed like a pack of cards, have similar stories. Many have spent all their compensation on medical bills, according to ActionAid Bangladesh.

Begum says the slow wait for justice is the only thing that keeps her going. “None of us wanted to enter the factories that day,” she recalled. “They forced us to work despite pillars that crumbled the day before. Five years have passed and no one has been tried or punished.”

“The building owner is having a great time in jail. All the other accused are out on bail. The factory owners and the managers who threatened to fire us if we didn’t work are free,” said the tearful mother of an 11-year-old boy. “So many of us have lost limbs or been crippled. But now everyone has forgotten us and the disaster,” she added.

Rana Plaza’s collapse triggered international outrage. European and U.S. clothing brands—including Primark, Mango and Benetton—were pressured to improve pay and conditions at the Bangladesh factories which employ some four million workers with wages starting at $65 a month, among the world’s lowest.

A group representing more than 100 European brands still warned however that “major life-threatening safety concerns remain” among the 4,500 textile plants.

The work to improve conditions has been faster than the trial of Rana Plaza owner, Sohel Rana, and nearly 40 others—including factory officials and government inspectors who were charged with murder. Rana was jailed for three years last August for failing to declare his personal wealth to Bangladesh’s anti-graft commission. He also faces the murder charges.

Proceedings are dragging on and prosecutors say a verdict could take five more years. Prosecutor Mizanur Rahman blamed repeated adjournments. No witness has yet given evidence. “Some witnesses have already gone missing,” he said.

Union leaders said the painfully slow pace of the trial has “created a climate of impunity.”

“We thought the Rana Plaza disaster would help workers to unionize and hold protests for improved rights. But the opposite has happened,” said Mohammad Ibrahim, a top labor activist. Ibrahim said garment factory owners use “local goons,” the police and the government to crackdown on any hint of protests.

Garment manufacturers have an outsized influence given the $30 billion of textile exports account for some 80 percent of Bangladesh’s total.

Ibrahim was one of the 41 leaders detained in December 2016 when thousands of workers staged protests for higher wages.

He said he received a death threat from police. “Some 1,700 workers were fired and none got back their job,” he said. “The garment owners have become more powerful since the disaster.”

Whistleblower journalist Nazmul Huda was feted after the disaster for being the lone reporter to write and broadcast about the crumbling pillars at Rana Plaza before the collapse. His film is key evidence now. But Huda is now seeking ways to flee the country after he was detained for 42 days and charged with “inciting” workers’ pay protests.

“The police took me away in a car, blindfolded. I was cuffed and dangled on a rod in the car. Then, they beat me with sticks,” he told AFP. “They hit me on my head and ears with gun butts. I barely can hear in my right ear,” he said.

At weekends, Sultan Mollah visits the Rana Plaza ruins, which are now a vast hole filled with hyacinths. Mollah has been gripped by guilt at having let his reluctant daughter go to do her shift that day where she perished in the collapse.

“My heart is shattered when I think of her. I try my best to forget the past,” he said. “But how could I forget when I see all these murderers roaming freely? No one has yet to face any justice and I doubt they ever will,” said the 50-year-old father with his own personal agony.