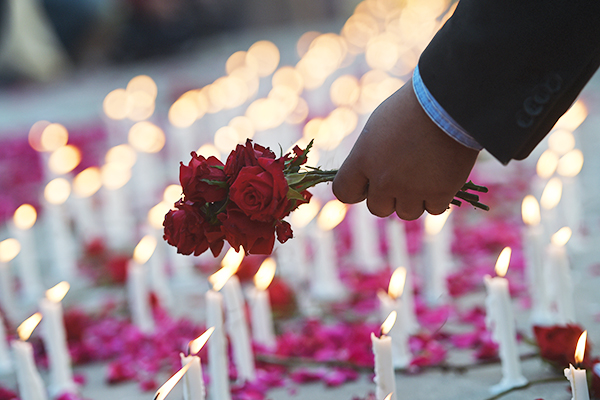 Five years ago, on Dec. 16, 2014, six militants of the banned Tehreek-e-Taliban Pakistan targeted the school, killing 134 students and 16 faculty and staff. In the immediate aftermath, the government announced a National Action Plan against terrorism whose effectiveness has been repeatedly called into question.

The anniversary is being marked in Khyber-Pakhtunkhwa province with an official remembrance ceremony at the APS campus for parents of the victims. Senior officials of the military and the provincial government would also be in attendance. In addition, there are programs organized at the APS Shuhada Hall at the Archives Library and Islamia College University, Peshawar.

Senior officials in the government and the military issued a series of statements mourning the fallen. They also vowed to prevent any similar incident from happening in future.

In a message posted on Twitter by the Inter-Services Public Relations Directorate, Pakistan Army chief Gen. Qamar Javed Bajwa said the APS tragedy would “never be forgotten.” He added: “Five of the involved terrorists have been hanged through military courts. Salute to the martyrs and their families.”

The statement went on to praise Pakistan’s victory against terrorism in the intervening years. “We have come a long way in failing terrorism as a nation,” said the Army chief. “United we move towards lasting peace and prosperity of Pakistan.”

Similarly, President Arif Alvi also issued a statement remembering the victims of the APS strike. “The nation cannot forget the massacre of little angels/teachers of APS 5 years ago on this day,” he said in a message on Twitter. “Hard to commemorate this day without tears in one’s eyes. In its remembrance, we reiterate our pledge to root out terrorism and extremism in all its manifestations from our country,” he added.

Human Rights Minister Shireen Mazari, also posting on Twitter, said it was a day that could never be forgotten. “A tragedy so intense it shook the nation to its core—the APS terror attack that took away the lives of so many innocent children along with their teachers. Tears and prayers are all we have left alongside a resolve to ensure ‘never again’,” she added.

Punjab Chief Minister Usman Buzdar, in his message, said students and teachers killed in the APS attack had rewritten history with their blood to help make Pakistan a more secure and peaceful nation. “The exemplary unity of the nation had come to surface owing to the great sacrifices laid down by the martyrs in the war against terrorism,” he said, adding Dec. 16 would always be remembered as the day great sacrifices had been rendered. “The martyred children and teachers were heroes of the nation,” he said, adding there was no room for terrorism and extremism in Pakistan.

Pakistan Peoples Party Chairman Bilawal Bhutto-Zardari also paid tribute to the martyrs of the APS attack. In his message, the opposition leader said it was the responsibility of the nation to say “never again.” He said the killing of innocent children would haunt Pakistan until “we fight back against the forces that not just commit but also aid and abet terrorism.”

A day earlier, parents organized a Quran Khwani at the Archives Library’s premises and prayed to Allah to grant heaven to the souls of the departed. As in years past, a large banner with the pictures of the victims was displayed at the APS Shuhada Hall.