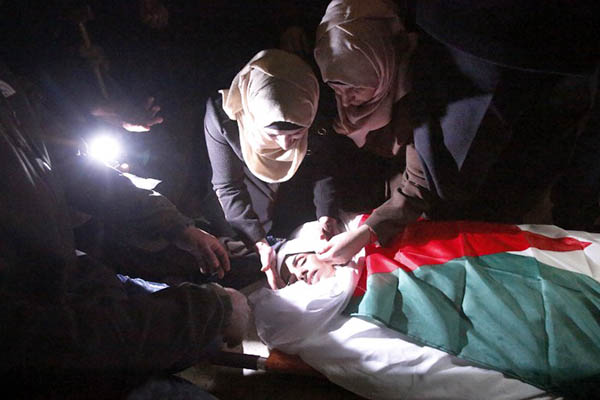 Relatives mourn the death of a Palestinian woman killed while allegedly carrying out an attack on Israelis. Hazem Bader—AFP

The U.N.’s resolution on illegal Israeli settlements in Palestine is long overdue.

The United Nations Security Council on Friday unanimously resolved to demand Israel remove illegal settlements in occupied Palestine. With the U.S. abstaining—Washington has used its veto 30 times in the past to block Security Council resolutions concerning Israel and Palestinians—the Security Council has finally paid heed to the injustice of occupation after eight years of silence. Israel hasn’t cared much for the resolution, with Prime Minister Benjamin Netanyahu saying he expects U.S. President-elect Donald Trump to compensate by vetoing any follow-up on the resolution.

Normal law doesn’t apply to occupied Palestine because it lives under martial law. The Israeli Army routinely targets its Muslim inhabitants and its land is being gradually eaten up by Jewish settlements. It took eight years for the U.N. to wake up because it was more focused on the intra-Arab war going on in the neighborhood since 2014, when the Muslims of the region thought they could live under democracy, with the region since succumbing to a grand sectarian war never before witnessed in the Muslim world.

But the Palestinian question has always been overshadowed by intra-Islam trouble. Arab states have invaded one another for long intervals after two wars fought with Israel, which the Arabs lost without reconciling to the existence of Israel. Realism dawned too and some Arab states maintained subsurface relations with Israel while fulminating against it.

Dictators have courted popularity by posing as champions of the Palestinian cause but found opportunity to fall upon other states in the neighborhood. In Lebanon, the Shia-Sunni divide caused a decade of violence which spread to the neighboring states. The long Iraq-Iran war sucked away much of the energy meant for the pursuit of justice in Palestine. Then the U.S. walked into Iraq in 2003 to ease Israel out of its Arab trouble. Since then, the Arab nations have been divided against one another, triggering civil wars that kill only Muslims. Supranational terrorist organizations like Al Qaeda and Islamic State have added to the crisis, killing fellow-Muslims to satisfy a rage that should have focused on the injustice in Palestine.