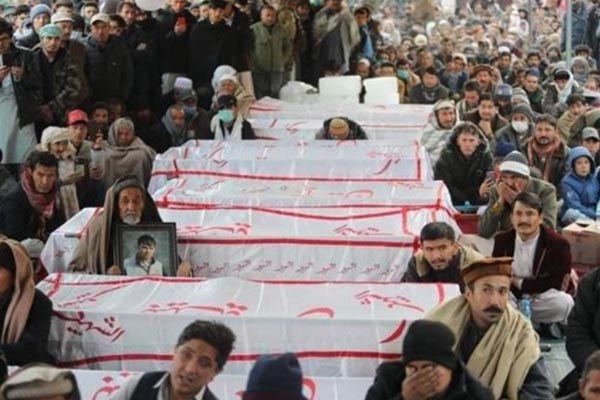 Negotiations between government representatives and leaders of the Shia Hazara on Tuesday night ended in stalemate, as the protesters refused to end their Quetta sit-in until Prime Minister Imran Khan personally visits them to condole the deaths of 11 coalminers in Machh.

Represented by Maritime Affairs Minister Ali Zaidi, Adviser to the P.M. on Overseas Pakistanis Zulfiqar Bukhari and National Assembly Deputy Speaker Qasim Suri, the government side urged the protesters to bury the deceased and end the sit-in. They claimed the prime minister would visit the area “soon” and address the protesters’ concerns.

The protesters, meanwhile, maintained that they did not want to meet the prime minister “in private” and demanded that he visit the protest site, condole with the victims’ families publicly, and assure them that the culprits would be apprehended and punished. “We are requesting the prime minister as children would ask for help from their father when they are in pain and misery,” one of the leaders told media to questions on why the prime minister’s presence was required.

In videos of the negotiations available on social media, P.M. adviser Bukhari can be seen asking the protesters what benefit would be gained from the prime minister visiting Quetta. He claims that if the prime minister personally visits, this would set a bad precedent and “in future if anyone dies, he could also be asked to visit by them.”

Sources have claimed that during a meeting of the federal cabinet on Tuesday, Interior Minister Sheikh Rashid Ahmed advised the prime minister against visiting Quetta for “at least two to three more days” to allow the situation to get “normalized.” The sources claimed that Khan had claimed the situation could have been resolved amicably if Balochistan Chief Minister Jam Kamal—who was reportedly in the U.A.E. until Wednesday morning—had been in the country to meet the protesters.

The bodies of the deceased have been placed on the Quetta-Sibi Highway near Hazara Town, blocking traffic and prompting efforts from the state to negotiate an end to the sit-in. A large group of men, women and children are in attendance, with protest leaders warning that the recent bout of killings will worsen if the government does not act against the culprits now.

“We demand the prime minister come to Quetta and meet us personally,” said a representative of the Hazara committee, Agha Syed Muhammad Raza. “Those who killed our people and their abettors must be brought to justice,” he added.

The traders association of Balochistan has also announced a citywide shutter-down strike on Thursday to show their support for the demands of the protesters.

Along with the sit-in in Quetta, protests have also occurred in Karachi, Islamabad and Gilgit. With outrage mounting nationwide, the interior minister met the protesters in Quetta on Monday, informing them the government was willing to accept all their demands apart from that of the resignation of the Balochistan government.

He also announced Rs. 2.5 million compensation for the families of each deceased coal miner. “Each family of the martyrs will be given Rs. 1 million by the prime minister, as well as Rs. 1.5 million by the Balochistan chief minister,” he said.

“The secretary-general strongly condemns the terrorist attack and killing of at least 11 coal miners in the Balochistan province of Pakistan. He extends his sincere condolences to families of the miners and the people and government of Pakistan,” Guterres’ deputy spokesperson Farhan Haq told journalists in New York. “He trusts the Pakistani authorities will do everything possible to bring the perpetrators of this terrorist act to justice,” he added.

Separately, UNGA President Bozkir said he “strongly condemns the terrorist attack,” and extended his condolences to the families of the miners and the Pakistani people.

Eleven coal miners were killed, and four others seriously injured, after armed men raided their residence at Machh in Balochistan’s Bolan district. According to police, the militants separated the Shia Hazara, walked them to nearby mountains, tied their hands and feet, and opened fire on them. The Islamic State militant group has claimed responsibility for the attack.