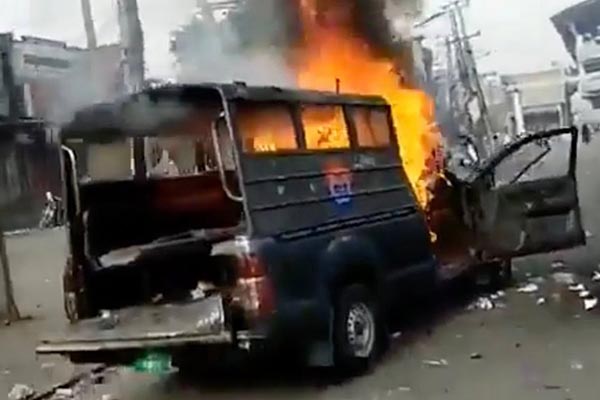 Hundreds of protesters and police injured, with authorities claiming thousands have been arrested for blocking main roads and attacking law enforcement personnel

At least four people, including a policeman, were killed and hundreds others injured on Tuesday, as Tehreek-e-Labbaik Pakistan (TLP) clashed with law enforcement personnel who were trying to clear main roads and highways that had been blocked over the arrest of Saad Hussain Rizvi.

The TLP protest, which has devolved into rioting in several cities, erupted on Monday afternoon after police in Punjab placed party chief Rizvi under arrest. He was reportedly taken into custody after he threatened to launch a long march on Islamabad on April 20 after the Pakistan Tehreek-e-Insaf-led government failed in fulfilling terms of an agreement it had inked with the rightwing party in February.

Under the deal, the PTI was supposed to place before Parliament the TLP’s demands for a complete boycott of French goods, as well as the expulsion of the French ambassador from the country over the publication of blasphemous caricatures. It also stressed that no TLP workers would be arrested by the government and any violation of the agreement would result in nationwide protests.

On Tuesday, two police constables were killed by rioters in Lahore during a clash at the Faizpur Interchange. The same clash resulted in at least 40 policemen being injured, prompting the registration of a case against the TLP chief and others under terrorism and related charges. Over the past two days, according to police, more than 300 personnel have been injured in clashes across Punjab, as the rioters attack them with sticks, bricks and guns.

In addition to the deceased constables, one passerby was shot dead in Faisalabad after TLP workers opened fire on police, while another passerby in Rahim Yar Khan died after being hit by a thrown object. Police told local media that anti-riot personnel were unarmed and were unprepared for the TLP workers opening fire on them.

Videos of the clashes, and their aftermath, showed TLP supporters forcing captured police officials to shout slogans in their favor. Many of the officials were visibly in distress, with untreated injuries and torn uniforms. Nationwide, TLP workers took police hostage in a bid to force the government to accept their demands, prompting operations to free the detained and clear the blocked areas.

In Sindh capital Karachi, most parts of the city returned to normal on Tuesday, but sporadic clashes continued between police and TLP workers who were trying to block traffic on major arteries. The most intense exchange occurred at a funeral of a TLP worker who was allegedly killed by police a day earlier, with mourners pelting police mobiles with stones and chanting slogans against the provincial government.

In Peshawar, police arrested over 100 TLP activists who were staging a sit-in.

The government has deployed paramilitary Rangers—two of whom were taped in Gujranwala on Monday night leading slogans in favor of the TLP—in a bid to restore peace in sensitive areas of Sheikhupura, Gujranwala, Chakwal and Rahim Yar Khan.

Additionally, the federal cabinet approved the deployment of Rangers in all major cities during Ramzan to help maintain law and order. “Every group has a right of protest and we are ready to hold talks with TLP,” Science and Technology Minister Fawad Chaudhry told a press conference after the cabinet meeting. To a question, he clarified that the government ready to talk with “any religious group,” including the TLP, but would not take “dictation” from any group. “The writ of the state cannot be questioned,” he said, perhaps forgetting his own party’s anti-government riots and protests in the previous government.

Separately, the Interior Ministry decided to respond “sternly” with anyone creating unrest in Islamabad. Interior Minister Sheikh Rashid Ahmed—who had loudly voiced his support of the TLP in 2017 and continues to suggest a political alliance with them—has issued instructions for the suspension of internet services in all sensitive areas for 24 hours in a bid to prevent the TLP from seeking support or spreading their message via social media.

As the protests enter their third day, several major arteries of the country continue to be blocked, paralyzing business and industry.

While the motorways have been reopened and normal traffic allowed to resume, major roads in cities continue to be blocked by hundreds of TLP workers who have vowed not to leave until their demands have been met. In Islamabad, Murree Road remains closed to all types of traffic while Bara Kahu is also blocked with parked trucks.

In a statement, TLP spokesman Tayyab Rizvi said the protests would continue until Rizvi had been freed and the “French ambassador deported.” He warned that more party workers would join ongoing sit-ins to replace the supporters that had already been arrested by law enforcement officials.

Since November 2020, the TLP has been demanding the expulsion of the French ambassador over the publication of blasphemous caricatures in France. A sit-in in Rawalpindi at the time ended after an agreement with the government in which the PTI agreed to place the matter before Parliament “within three months” and freed all arrested workers. Upon the expiry of the deadline, in February, the TLP renewed its demands, prompting the government to seek a two month reprieve, also on the condition that all arrested workers would be released. The latest deadline is set to expire on April 20.