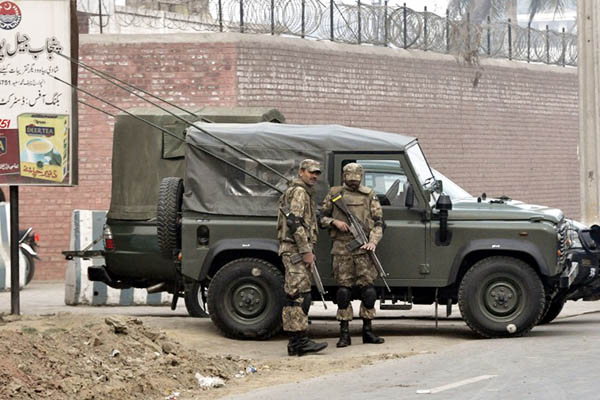 Soldiers stand guard outside the prison where the executions took place. Chaudhry Asad—AFP

Five of the six men already hanged were guilty of attempting to assassinate Gen. Pervez Musharraf.

Another four militants were executed on Sunday after Pakistan ended a six-year moratorium on the death penalty following a Taliban school attack that killed 149 people, officials said.

The hangings follow those of two convicted militants on Friday after death warrants for the six men were signed the day before. “Ghulam Sarwar, Rashid Tipu, Zubair Ahmed and Akhlaq Ahmed have been hanged for an assassination attempt on Gen. Pervez Musharraf,” said a prison official in Faisalabad.

Pakistan’s decision to reinstitute executions was slammed by human rights groups, with the United Nations also calling for it to reconsider the move.

Two senior government officials of Punjab province, where the executions took place, confirmed the hangings. “The brutal killers were clearly frightened and sought mercy from the jail staff on their cruel, inhuman and un-Islamic act,” the state-run Associated Press of Pakistan (APP) said. “They admitted that their brutal and inhuman acts had finally brought them to the gallows,” it added.

Pakistan’s military chief on Thursday signed the death warrants for the six militants who were on death row, after the government ended the moratorium on Wednesday. On Friday, militants Aqeel, alias Dr. Usman, and Arshad Mehmood were hanged in Faisalabad jail. Aqeel was convicted for an attack on the Army headquarters in Rawalpindi in 2009 and was arrested after being injured. Mehmood was convicted for his involvement in the assassination attempt on Musharraf in 2003.